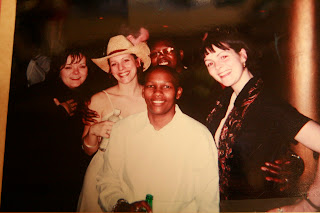 Today is many things to many people...but before the day was a remembrance it was a birthday. And as Jon and I sat last night talking about our memories of living in NYC during 9/11, I reminded him that tomorrow is also Jabby's b-day. And Jabby you deserve to be honored too! So I wanted to share a bit of me and Jabby's past (A.K.A Jessica, to some) . This photo was taken in NYC in April of 2001 at the opening night party of Roundabout Theatre's production of Follies. This picture still cracks me up when I see it. The girl next to me (I'm the one in the cowboy hat) is CeCe and I think she was a security guard at the main offices of Roundabout. Anyway she kept hitting on me and Maryanne Finnamore (who is the girl on the far right), CeCe was really aggressive with her flirtation, would follow me into the bathroom even though she brought a date with her who is the girl in the center front. Eventually when Cece would not let up I made Jesscia be my girlfriend so that she would leave me alone. I have no idea why Jon didn't come to party but it came to the point where I quietly yelled at Jabby (you know that "yell" while you clench you teeth, your mom probably did it a few times) , "kiss me dammit so she'll leave me the fuck alone!" I added tongue just to make it more believable.
It's nice to have a best friend who also stands in as your lesbian partner when needed. Someone to walk down the street with holding hands, someone who will always laugh the loudest at your jokes, someone you can always show your true self too.
And I am so grateful I have that in Jabby. Happy Birthday Jabby! Here's a big smooch from me!

Happy Birthday Jessica,
Love,
From your other Mom and Rabbi Dad