My wife recently remarked to me that she doesn't feel like our kids get excited about anything, that they don't show their excitement like other kids do. Her comment stuck with me for a few days. As I've been thinking about it and churning it around in my mind, I honestly had to agree with her. There have been several times, just in the last year, when I've been disappointed by their reaction to something. For example this past Christmas we surprised the boys with tickets to Legoland, Florida. We live in Maryland so this was a big gift that involved airfare and such. Both boys had been begging to go to Legoland for months, basically every time the Lego "magazine" arrived in our mailbox. (I use that term in quotes because if you've ever seen this so called literature that the company mails to my children for free...then you know that it is basically a glorified toy catalog.)

I set up the iPhone on the bookshelf to secretly record their faces once they opened the package with the Legoland tickets and park map, hoping that their reaction would be as over the top happy as some of the videos I've seen on YouTube. They both barely cracked a smile. Instead they were full of questions about when we are going, for how long and then once the day arrived they were both happy to be there. Excited? Well let's just say that their "excited" isn't anywhere close to other children's excited.

And after further thought on my wife's recent remark to me about it, I've come to the conclusion that my youngest son has been looking up to his brother for the way in which to conduct himself emotionally. Almost all children do this, younger siblings look to the older sibling to interpret if something is a good idea, safe etc. Well my oldest son, Logan, is on the Autism Spectrum. And children on the Autism Spectrum have a great deal of difficulty appropriately expressing their emotions.

When Logan was around three years old I use to hold up flash cards at the dinner table that had pictures of various people expressing emotions. These were stock images that showed him what crying looked like, surprise, happy, thoughtful etc. Children on the Autism Spectrum don't naturally understand emotional facial reactions, it often times has to be learned.

So it shouldn't come to a surprise that those children then don't always express their own emotions as you or I would. Logan's "really happy" looks like a very toned down version of a nuerotypical child's "really happy". His emotional reactions aren't as extreme or as identifiable. And now I've realized that my younger son's emotional reactions are simply him imitating his autistic brother, not on purpose of course, it has just happened the way these things do within a family. Could this be a study for future research scientists? I think so. I wonder what else my younger son has learned how to do by watching his older brother and though he is not on the Autism Spectrum he might unintentionally act as though he is.
Have you ever encountered this between siblings where one child is special-needs and the other is not? What did you observe?
2 comments: 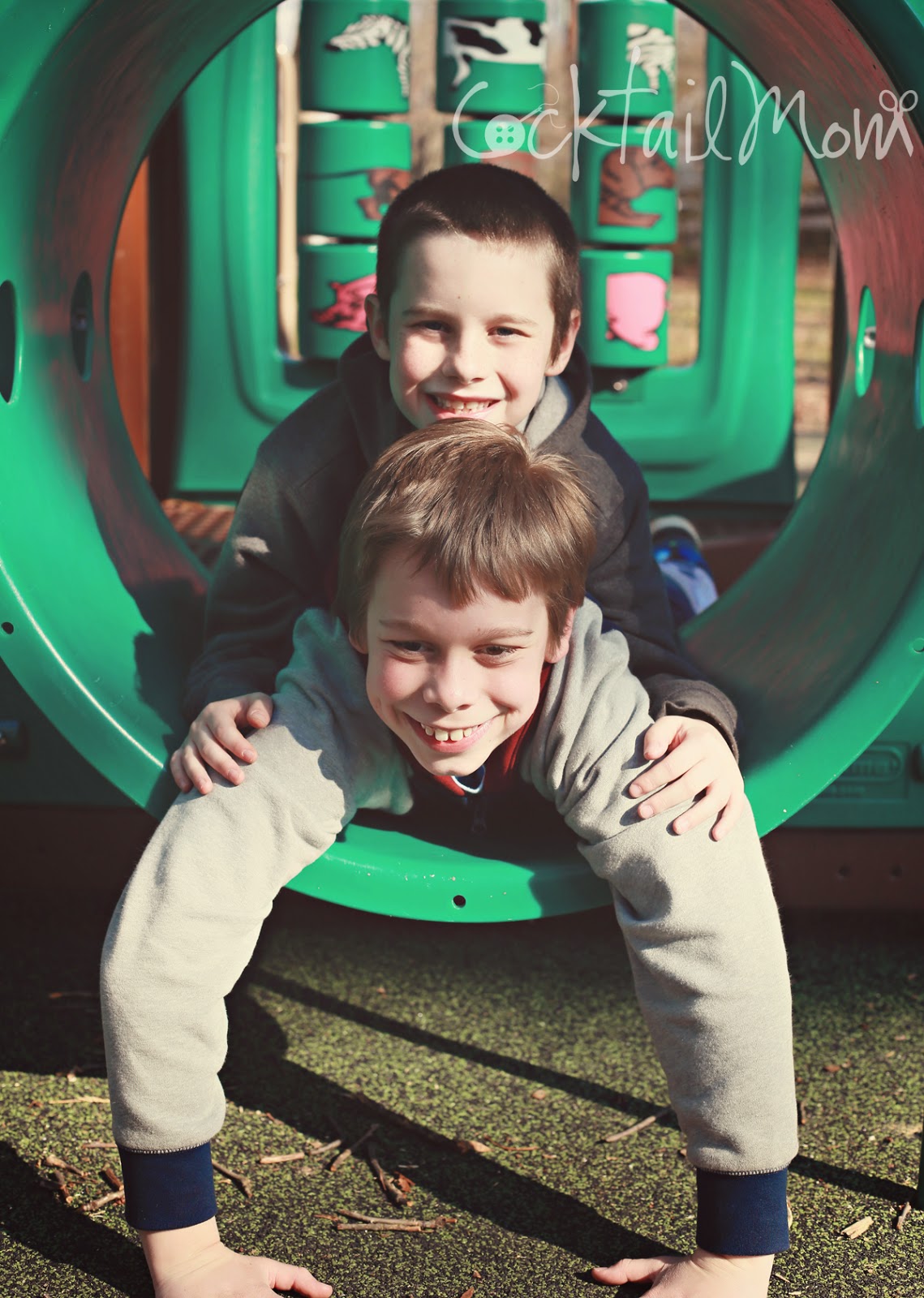 The guidance councilor at my boy's school pulled me aside and asked if my younger son, Zane, could participate in "Lunch Bunch" with one of his classmates. Lunch Bunch is for kids who have social goals on their IEP, Individualized Education Plan. The special-needs child and a few classmates can have lunch in one of the teacher's offices, typically the special education teacher's office or the guidance councilor's office to work on whatever the social goals might be for that child. It’s a relaxed environment for the special-needs child to learn how to have a conversation, take turns etc. My oldest son, Logan, who is on the Autism Spectrum, has been enjoying Lunch Bunch for two years now and I think it's been a wonderful tool to aide in the development of cultivating friendships for him. Every kid in his class wants to be chosen to have the special lunch and play with special toys while everyone else sits in the cafeteria.

I was honored that Zane was chosen and not the least bit surprised. He naturally gravitates towards other children on the Spectrum because, I think, they remind him of his brother. But I wanted Zane to choose whether or not he wanted to participate in Lunch Bunch. He lives and breathes life under the Autism umbrella and I didn’t want to force this on him.

While on a dog walk I decided to bring it up and ask him what he thought about participating in Lunch Bunch with this child from his class, Sam*. He seemed curious but wanted to know if he could invite some friends as well. I explained to him how Logan is the key kid for Lunch Bunch in his class and he gets to be the one who invites other kids and Sam is the key kid in his class. I went on to further explain that the good news is that Sam picked him to participate and that it's a special opportunity.

Zane was walking next to me and became silent; I could tell he was analyzing it in his mind. Trying to the change the subject I asked him who sat at his group of desks. He went through the names of all the kids telling little stories about each one. Sam was one of them. So I asked Zane, "How is Sam doing in school this year?"
"Not good. Yesterday he left early because he wouldn't get off the floor."
"What does the teacher do when Sam lays on the floor?"
"She taps him on the shoulder and then Sam grunted at her like this..." (He grunted softly to demonstrate)
"Oh, that's too bad. Did you know that Sam has a different kind of brain?"
"Like Logan?", he asked.
"Yeah, like Logan."
"That’s what I thought. But no one is there to help Sam like Ms. Drew does for Logan."
(Ms. Drew is Logan’s dedicated aide)
We walked for a bit longer in silence and then Zane said, "Do you think Sam would want to be my friend?"
"I think he would. He seems like a pretty cool kid. And I bet you guys have a lot in common."
"He just ignores me though."
"I think he's just processing everything that is going on, I’m sure he doesn't mean to ignore you."
"Just like Logan does sometimes."
"Yup, like Logan does."

I'm instantly reminded of what a compassionate child Zane is and how living under the Autism umbrella can be a pretty good thing after all.

(* name of the child has been changed)
No comments: