Aim for what you want and go for it! 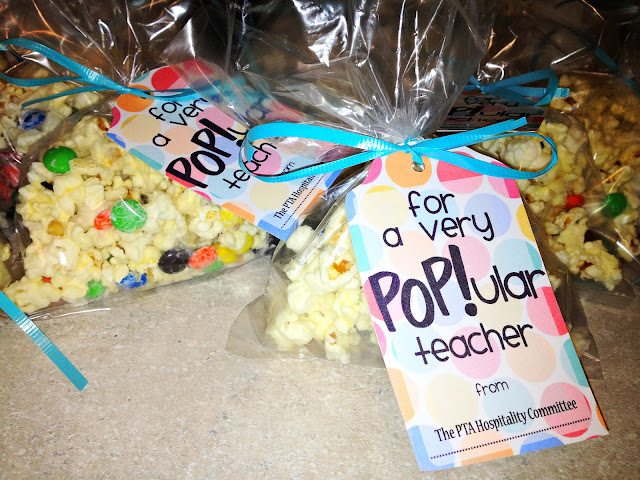 At my children's school we have a PTA Hospitality Committee, volunteer parents who every month surprise the teachers with a little goodie in their mailbox. Our goal is to extend Teacher Appreciation for the entire school year. We live in a county where the teachers have not seen a raise in many years and as parents we want them to know how much we appreciate their hard work for our children.

September was my month and when I saw this recipe all over Pinterest I knew I had to try it. I actually loathe popcorn and I realize that I am a small percentage of the population who feels this way about popcorn.

I followed Nest of Posies' recipe; I did batches of 3 microwave bags of popcorn to 1 bag of candy melts and simply eyeballed the amount of m&ms in each batch. I will warn you- the best way to get the popcorn coated without breaking the puffed kernels into tiny specks is to get dirty and mix it with your hands.

I divided the treats into small plastic bags and tied with ribbon and a tag, I used the wonderful free printable over at Domesticated Lady. Surprise your children's teachers with a quick, easy and affordable treat. 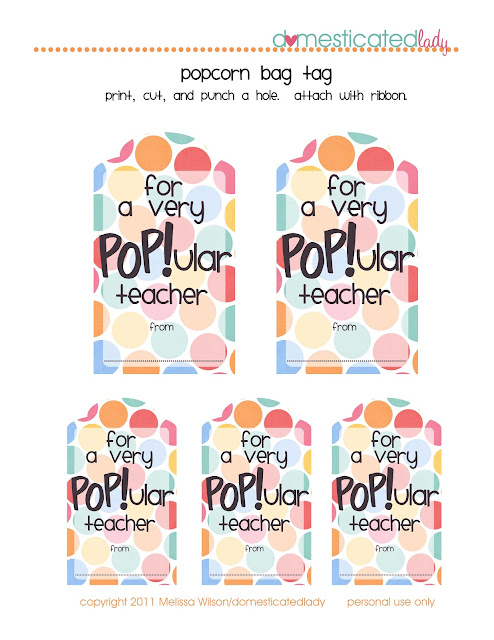 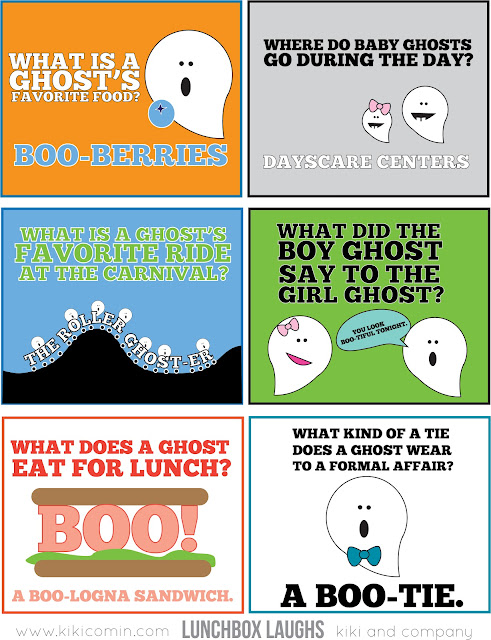 My boys LOVE Halloween. They also love jokes. We have several joke books laying around the house just in case the moment calls for a good knock-knock-joke.
When I saw this free printable on Today's Creative Blog, I knew I'd have to share them with you.
Click on the image above and print out, place one joke in your child's lunchbox to count down the days till Halloween. 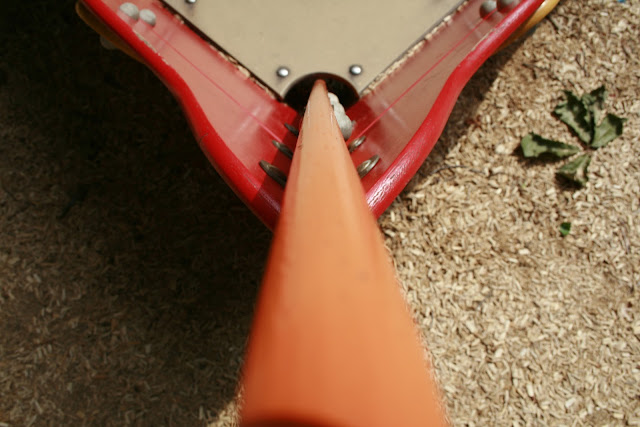 "No object is mysterious.  The mystery is your eye."
~Elizabeth Bowen, The House in Paris, 1935
No comments: 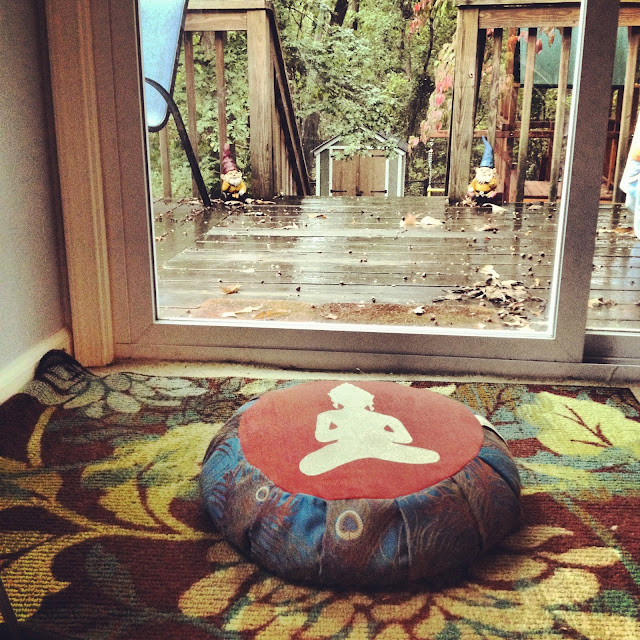 Do you feel like you never have time for yourself? You give and give...

If you are like many moms you are at the bottom of that list, typically after the dog. This has got to change- TODAY!

I know many women who give until they have nothing left, exhausted physically, emotionally and mentally. Finally her spouse notices and rewards her with a day at the spa, friends ooh-and-ahh at how lucky she is to spend the day relaxing only concerning herself with what type of massage to get. But then the day after the spa visit life resumes back to "normal", she is back to giving until her well runs dry yet again.
I use to be one of those moms, putting myself at the bottom of the list of needs. And then I woke up; unhappy in my marriage, unhappy with myself and my life's purpose. So I overhauled my life. I got a divorce, started my own business and began putting myself at the top of the list.

Now I'm not suggesting you get a divorce or change careers; unless you are headed in that direction. What I am suggesting is that you make yourself a priority EVERY DAY!
Take five minutes and sit on a pillow or in a chair, close your eyes and breathe.
Just breathe.
Turn off your Facebook and email alerts, silence your phone. Inform your spouse and children that when you are sitting on the pillow with your eyes closed you are NOT to be disturbed. This will be hard for them, so it's best to choose a time of day when there is not a lot of activity going on. That doesn't mean when no one is home, they can be there too. Just inform them of the new rule and that you expect them to be respectful of your time.

Allow yourself five minutes to clear your mind and fill your well. The world will not come to an end because Mommy sat down and breathed for 5 minutes.
You deserve this- make yourself a priority TODAY!
1 comment:

Email ThisBlogThis!Share to TwitterShare to FacebookShare to Pinterest
Labels: Parenting, Thoughts and Opinions 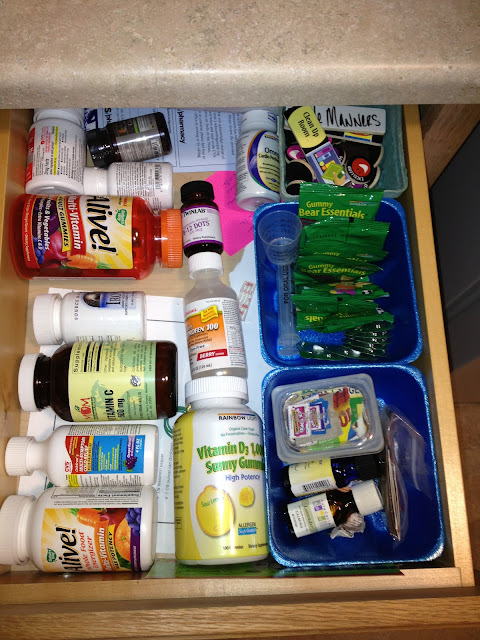 We all have that kitchen drawer that holds the odds and ends of our life. Some refer to it as the "junk drawer", housing such items as take out menus, rubber bands and watch batteries. In my house we have a vitamin drawer, which also holds other bits of randomness.... box tops for education, essential oils, chore magnets etc.
Using berry baskets and the Styrofoam containers that mushrooms are sold in is a great way to organize your kitchen drawers that catch the randomness of your life.
Sure you could go to Target and buy cute, hot pink plastic organizing baskets....but why?
Who is coming to your house to check out your junk drawer? No one is seeing it but you, save your money for family vacation!

Instead of recycling those mushroom Styrofoam containers- give them another lease on life.
Tackle that junk drawer- once and for all!

College Park Patch: Walking Children Through a Death in the Family


This article was originally published on the College Park Patch.

We are coming up on the one-year anniversary of the death of a dear friend of mine.
I met Monte in college. He was flamboyant and loud and, as a freshman away from home, I was both terrified and fascinated by him.
He had a voice like a gospel angel and wasn’t afraid of conducting a public performance, wherever that might be: Walgreens, a bar or restaurant or randomly in the middle of the sidewalk in New York City where we both went to live after college. When his spirit was moved to song… he sang!
Monte struggled with cancer and died too young at 39 years old. I've been thinking about Monte a lot lately, I’ve been having dreams about him and I know it’s because the anniversary of him dying is only days away. Randomly, when I see someone that reminds me of him or hear a song that I know he’d like, my eyes begin to tear up and I’m instantly reminded that he isn’t here to pick up the phone and call to tell unimportant details of my day to.
“Oh my word Monte, you’ll never believe what this woman at the DMV is wearing!”
My children have noticed my moments of sadness. The other day, out of the blue, my youngest son said, “Mommy can we watch that video of your friend singing to L in your belly?”
I have a video of Monte singing to my belly at my baby shower when I was pregnant with L. If the house were on fire, I’d grab my children and that VHS tape and run.
We watched it and halfway through my older son appeared in the room, realizing what were watching and said, “I want to see it from the beginning!” So we watched it again and again, never tiring of hearing his beloved voice.
TO CONTINUE READING CLICK HERE
No comments: 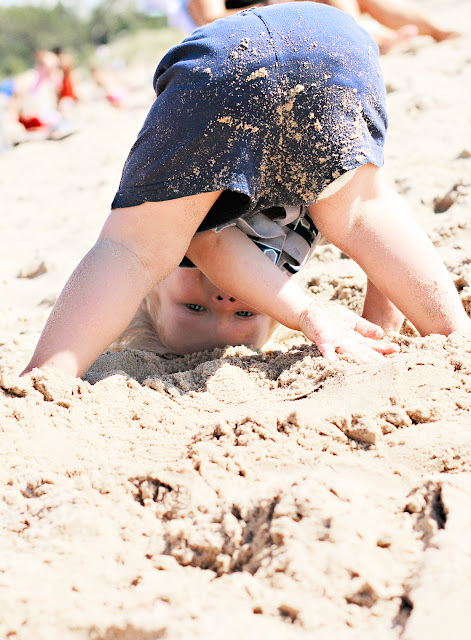 Try and look at the situation from a different view.

This article was originally published on the Greenbelt Patch.
Almost weekly my oldest son, L, who is on the Autism Spectrum has a new career that he wants to be when he grows up. His career dreams used to last much longer.
We had an entire year of him wanting to be an engineer, then he dreamed of being a scientist. His longest running ﻿dream career yet has been an astronaut, but it was recently was overthrown by being a soldier.
It's hard to explain his desire to be a soldier. We aren’t a military family, and we don’t know anyone currently in the military. He doesn’t even have a cool uncle in uniform that he looks up to, who comes to family functions. But when asked the “what do you want to be when you grow up?” question, the first thing out of his mouth is—soldier.
As school was starting, he met a soldier in person, during the onslaught of extracurricular activities that comes with a new school year. Here's what happened:
I am at the Greenbelt Community Center signing up both of my children for classes when a man in army fatigues enters the office. One of the employees offers to help me at another desk so that both of us can be serviced at the same time. While I stand a few feet away, the boys stay by the door. L’s gaze immediately hooks on this man.
As I look over my shoulder, to keep an eye on my children, I notice the man has a large scar running down the side of his head. L approaches him with his arm stiffly erected in front of him, his hand out to shake the soldier’s hand. The man takes my son’s hands in his and shakes it ever so gently.
I notice that I’m holding my breath for fear that L is going to ask an obtrusive question. ﻿Children on the Autism Spectrum don’t have filters and L will speak exactly what is on his mind. Often it’s not the most polite thing to say, but instead it is brutally honest. I'm, of course, worried that L is going to ask him about his scar or worse.
L looks the man in the eye and with a furrowed brow says, “Thank you for the work you did in the war.”
I inhale, biting down on my lip, hoping that holds back the tears that are instantly beginning to well up in my eyes.
The man is obviously surprised by this nine-year-old's respect and thanks him. L says, “Can I ask you something?”
TO CONTINUE READING CLICK HERE 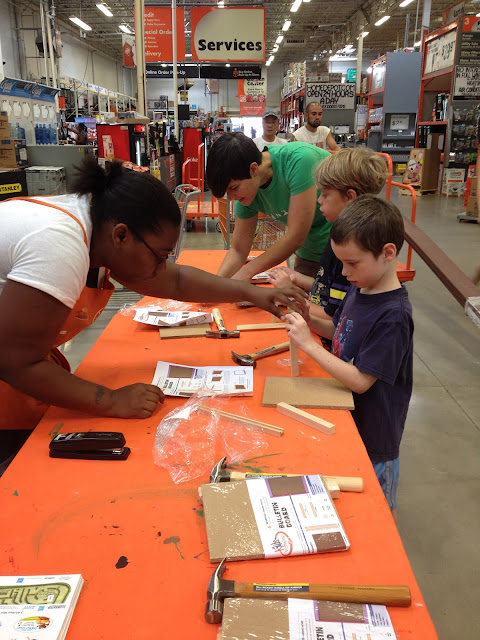 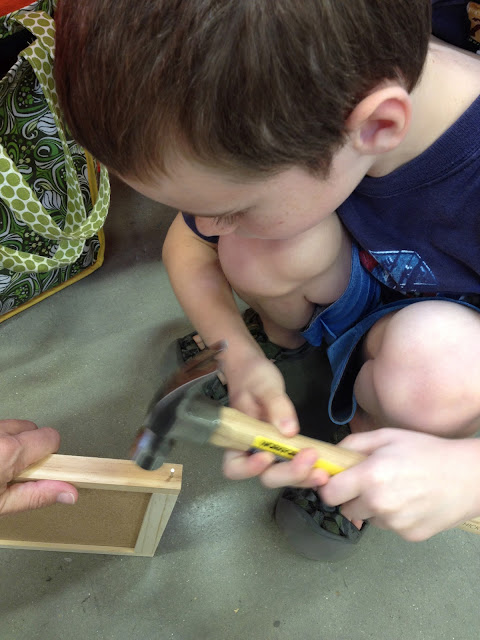 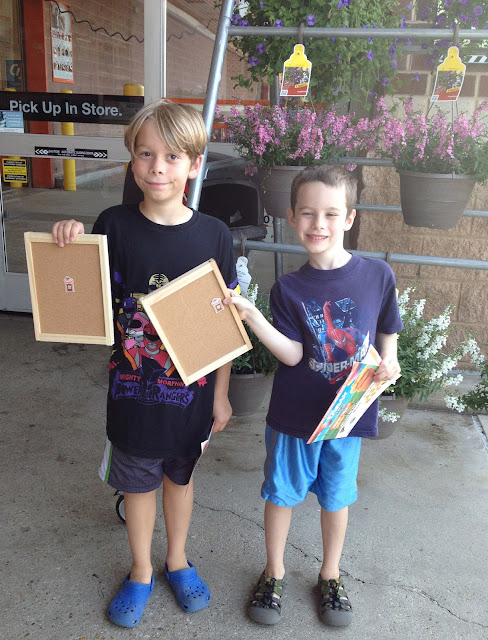 If you are looking for a free and fun thing to do with your kids this weekend head over to your local Home Depot for the Kids' Workshop.
On the first Saturday of each month the children can participate, along side of their parents, in a building project.
My boys love to bang nails and build so this project was perfect for them, their very own cork boards for their bedroom. Each month there is a different project and you do not have to show up right at 9am; you can come anytime during the hours of the workshop. Check with your local store to find out the exact hours. Please note you have to be present with your child to build the project, this is NOT a drop off program.
And the best part -it's FREE!