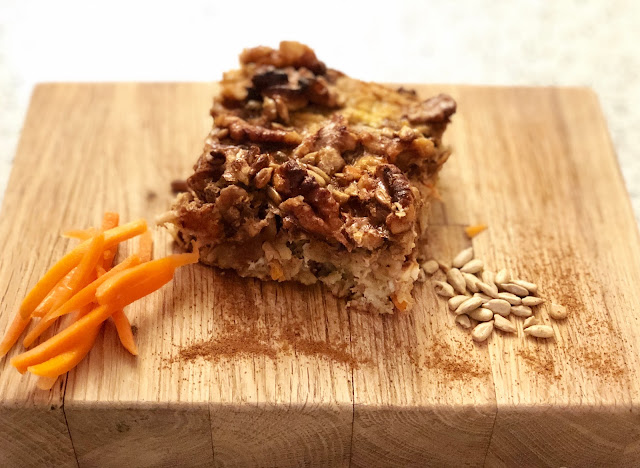 A health coaching client sent me this recipe and I thought that it sounded delish so I wanted to try it. But oftentimes what happens is that I start out with the intention of making a recipe and then I tweak it a bit to my liking. The original recipe can be found here, if you are interested.
Here is my version which includes a higher amount of eggs for additional protein and more carrots. I know that adding carrots seems like a crazy thing to have in a breakfast dish but surprisingly it goes really well with the overall flavor. Be aware that this dish isn't sweet tasting and some might find it bland because of that, try drizzling honey over it after baking if you find it isn't sweet enough for you.

Preheat oven to 400 degrees.
Spray a 19x13 inch baking dish with oil of your choosing.


Stir together and then pour into the bottom of the baking dish.

Autism Testing- The Dread of Reevaluation 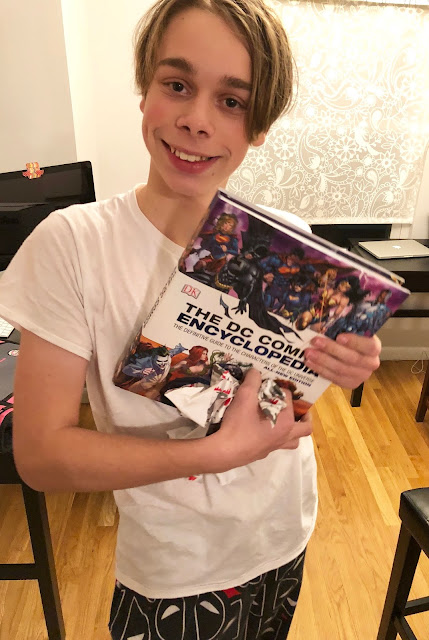 My oldest son, L, is on the Autism Spectrum and every three years or so the school psychologist at his public school is supposed to administer a battery of tests that pull him out of the classroom to reevaluate his diagnosis and services for his IEP (Individualized Education Plan). I've heard stories from families whose children are older than L, that their child tested differently as they aged and suddenly the services that their child was receiving in their IEP was taken away as though his/her
Autism changed and no longer rendered additional help. I've been told in hushed voices within vacant hallways, whispered information followed by the "you didn't hear this from me..." from school staff and administration that sometimes this is done because of budget cuts and there are other kids in the school who need the additional services more than my highly functioning autistic child. This is obviously not right but the reality is, that it is happening in a lot of public schools.

So it comes as no surprise that I go into this reevaluation with dread, I have a sinking pit in my stomach waiting for the results. I dread L being so successful that they take services away and I have to put my mama lion costume on and insist that he still keep the services that he has in order to continue to be successful. Also within these test results right in black and white is the prediction of your child's age based on how he answers the questions. One of the tests they administer is called the Wechsler Intelligence Scale for Children also known as WISC. We are now on the 5th edition of this test. And the purpose of this test is to provide insight into the child's performance, cognitive strengths and weaknesses, problem-solving and approach to learning.

When L first took this test the results said that he was functioning at an age that was two years younger than he actually was. I remember crying, sobbing actually when I read that. I looked over at my two boys playing and realized in that instant how this diagnosis was going to change everything for them because my other son is exactly two years younger than L. This meant they would be functioning on the same level even though they were two years apart in age. How could this not impact their relationship both good and bad?

This test, when it was first administered, fueled my desire to have Logan repeat kindergarten. It has also impacted how I perceive what he's mature enough to deal with or do regardless of whether or not he is at the age when other kids are doing it. For example, being allowed to stay at home by yourself. In our state, you have to be ten years old but L didn't do it until he was twelve. I know that these results will influence future decisions, we are on the cusp of being old enough for him to learn to drive, but also it will (hopefully) give us room to celebrate. L has made such strides recently, inducted into the National Jr Honor Society and cast in a local community musical, things that I didn't think ten years ago when he was first diagnosed would be possible for him.

I've learned to see my son.... all of him, including the Autism characteristics that don't make him unique in any way but actually make him Autistic. I know that the results don't define who my child is but they still feel like a blow to you as a parent, emotionally. This is the part of having a kid with special needs that a lot of parents don't understand. Our kids are constantly being evaluated and we are constantly being told about their deficiencies and weaknesses. It's a slippery slope that leads to depression and we parents of special need kids have to teach ourselves how to hold on to hope, how to see past the diagnosis and how to fight for what we believe our children need.
No comments: 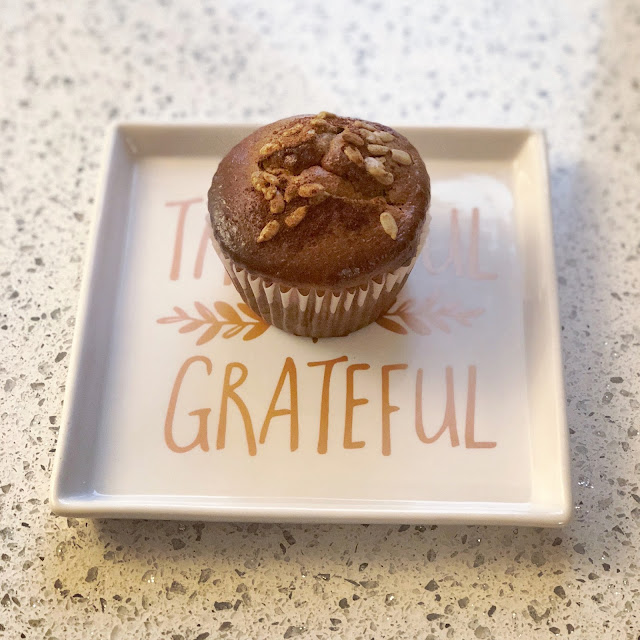 My newest favorite magazine is Clean Eating. I love that they embrace easy, budget-friendly, vegetarian and gluten-free recipes. Also featured in the magazine are the eating fads of right now including Paleo and Whole30. As a health coach, it is important for me to stay current on the latest diet trends and to be able to report back to my clients actual recipes that I have tried.

When I saw this recipe for Almond Butter Banana Muffins by Pamela Salzman, I immediately pulled out the ingredients and got to work. I have dedicated the first 45 days of 2018 to be SUGAR-FREE! My addiction to sugar got really out of hand over the holidays and I felt within my soul the need to do a detox.

I can clearly see that my sugar addiction is all in the mind. My mind makes excuses for needing something sweet, I put parameters and rules around having a dessert much like I did with alcohol when I was drinking. With 5 years of sobriety under my belt, I can see the mental thoughts for what they are, addiction. It's quite the tug of war going on in my head. Why do I need that sweet treat? What void is it filling? Am I avoiding something, numbing my emotions or am I just bored? I am just over the one week mark into the 45-day challenge and feeling a bit scattered mentally, the sure signs of an actual addiction. My mind continues to try and justify the need for dessert.

For some people when they are cutting refined sugar from their diets it's helpful to find recipes of things that they would normally like to eat so that they don't feel like they are being deprived. When our mind moves into deprivation mode our chances of success drop drastically. These Almond Butter Banana Muffins are going to do the trick!

I didn't have hemp seeds in my cabinet so I substituted with sunflower seeds and sprinkled the top of each muffin with additional cinnamon. They are delicious! Easy to make, gluten-free and only sweetened with maple syrup. Go ahead and try them, you'll be amazed how delicious this grain-free muffin tastes.

Here is a link to the recipe, which is also featured below:
https://www.cleaneatingmag.com/recipes/almond-butter-and-banana-muffins-recipe

1. Preheat oven to 350°F. Line a muffin tin with 10 paper liners.2. To a food processor, add all ingredients except hempseeds and blend until smooth and well combined. Remove blade and stir in ¼ cup hempseeds with a spoon.3. Pour batter evenly into prepared muffin liners, filling each cup to just below the top, and sprinkle with optional toppings of your choice. Bake for 30 to 40 minutes, until just set and a toothpick, comes out clean with dry crumbs. Transfer to a rack to cool completely. Keep refrigerated up to 5 days.
No comments: 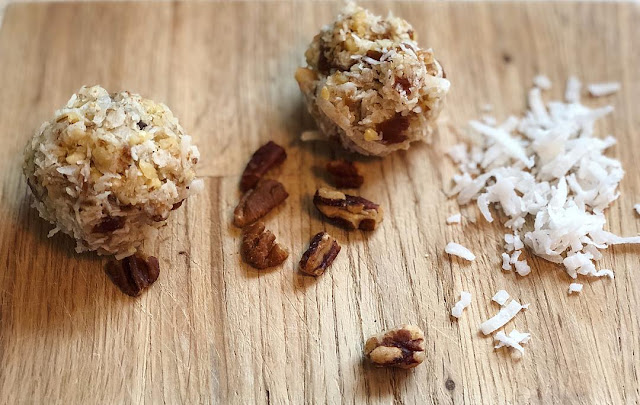 I am currently doing a 45 day NO SUGAR Challenge. Follow me on Instagram to get daily tips on sticking with your intention to living a healthier lifestyle without a sugar addiction.

Try reaching for these energy balls when you have a craving for a sugary dessert. Grind up 1 cup of walnuts or pecans in a food processor.Add 1 cup of whole dried dates, about 6, to the food processor and grind. Put in a bowl and add 1/2 cup of unsweetened coconut flakes and 1/3 cup of coconut oil.
Mix together and then roll into small balls. Store in an airtight container in the fridge for up to 2 weeks.
Enjoy!
No comments: