Make your own Watermelon Roll 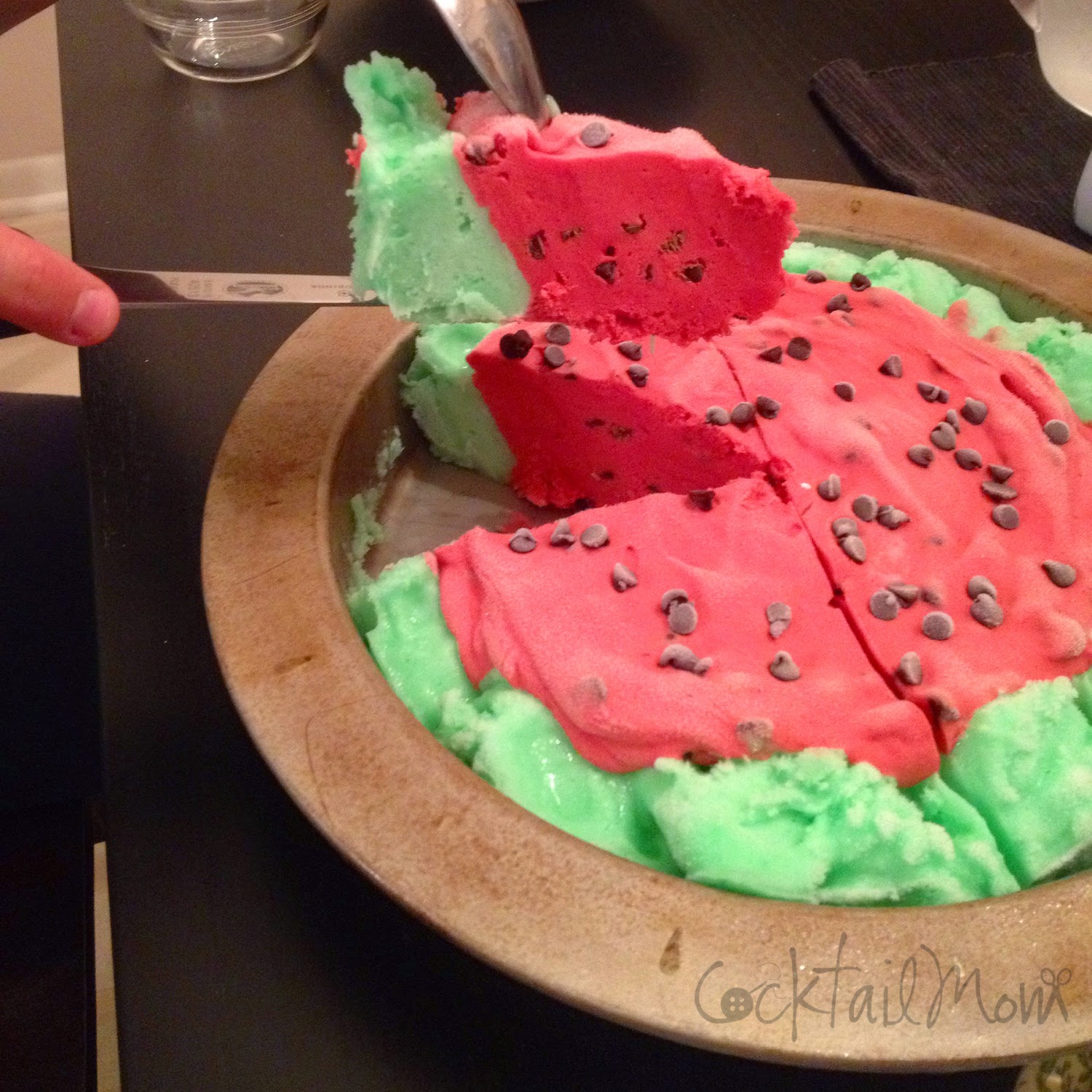 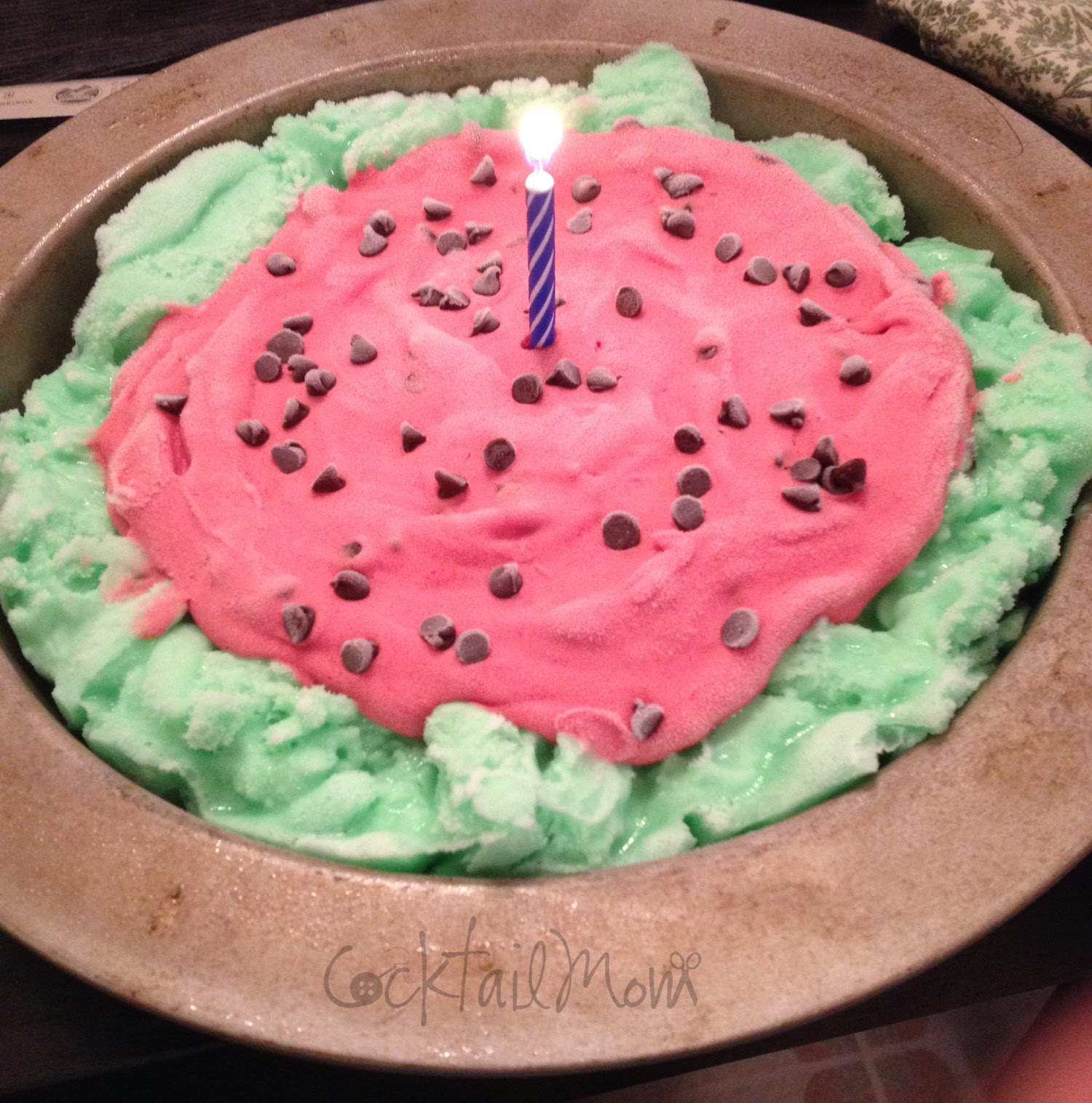 My wife LOVES Friendly's Wattamelon Roll, like it's her favorite dessert and the only thing she really wants to have on her birthday. The problem is that her birthday is in the middle of September and often times Friendly's only carries the Wattamelon Roll during the summer months. On her birthday I called three locations that were somewhat close to us and none of them had it in stock.

I thought to myself…it can't be that hard to make!

I purchased a container of lime sorbet, two containers of raspberry sorbet and mini chocolate chips. The hardest part of making this dessert is timing the melting of the sorbet. I lined a circular pan with wax paper and began with scooping out the lime sorbet and putting it around the entire edge of the pan. Having the raspberry sorbet thawing and a mushy consistency I then placed it in a bowl and slowly poured in the mini chocolate chips. I just eyeballed it and added chips as I stirred until it was the desired look. Then I quickly scooped it into the center of the pan and finished off with sprinkling the top with a few more chocolate chips.

The result was fantastic! Everyone enjoyed it and my wife was so touched that I went to the trouble to recreate her favorite dessert.
I highly recommend trying it for your family, it's low in fat and a wonderful dessert for guests who have allergies to milk/soy or who are gluten free. Just be sure to purchase gluten free chocolate chips! 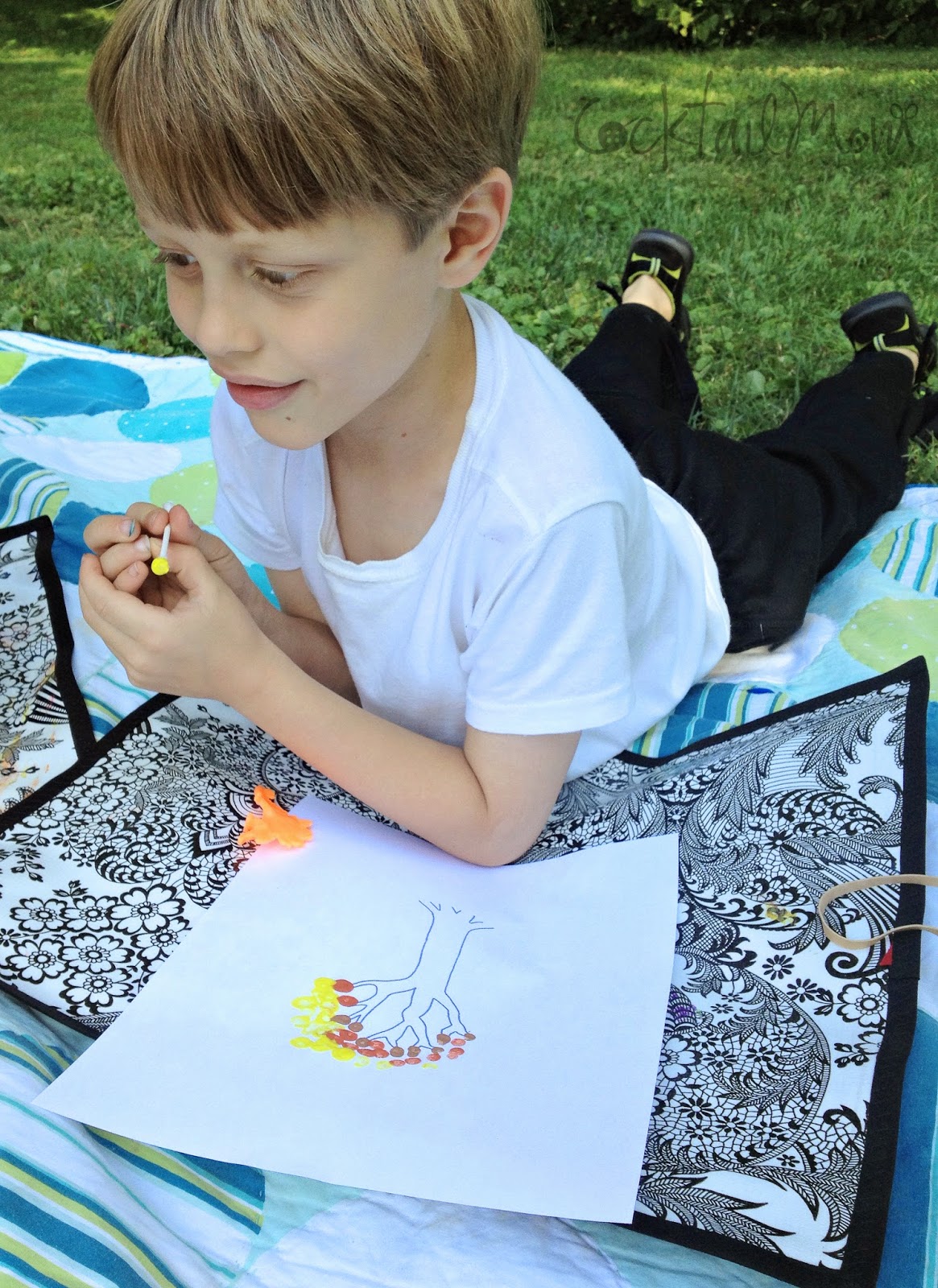 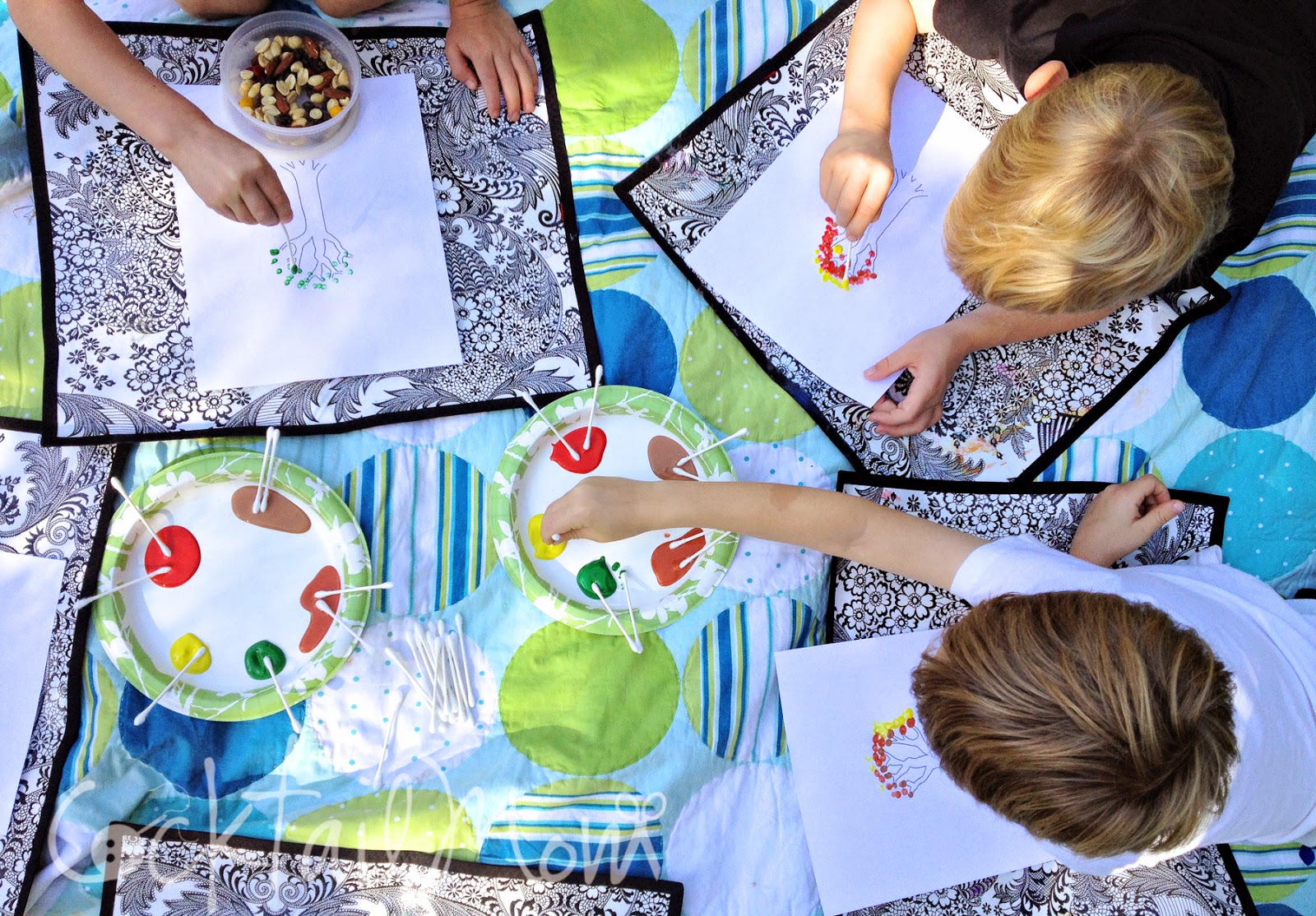 We are celebrating FALL! The sun goes down earlier and the scarves have come out of their hiding spot deep in the back of the closet. My yoga kids and I spent an afternoon creating fall tree paintings to celebrate the first day of fall.

I put various acrylic paints on paper plates for everyone to share in colors that we would see the leaves on east coast trees change into and with Q tips we painted beautiful trees by dabbing dots on the paper. I printed out the base of the tree on white paper using this free printable.

This is a great activity for kids from Kindergarten to third grade, it doesn't require a lot of prep and the mess is very minimal. Put a blanket on the ground and take your painting outside, it's a wonderful opportunity to talk to the kids about their favorite color of leaves.

Teach Kids How to Breathe During Hard Times 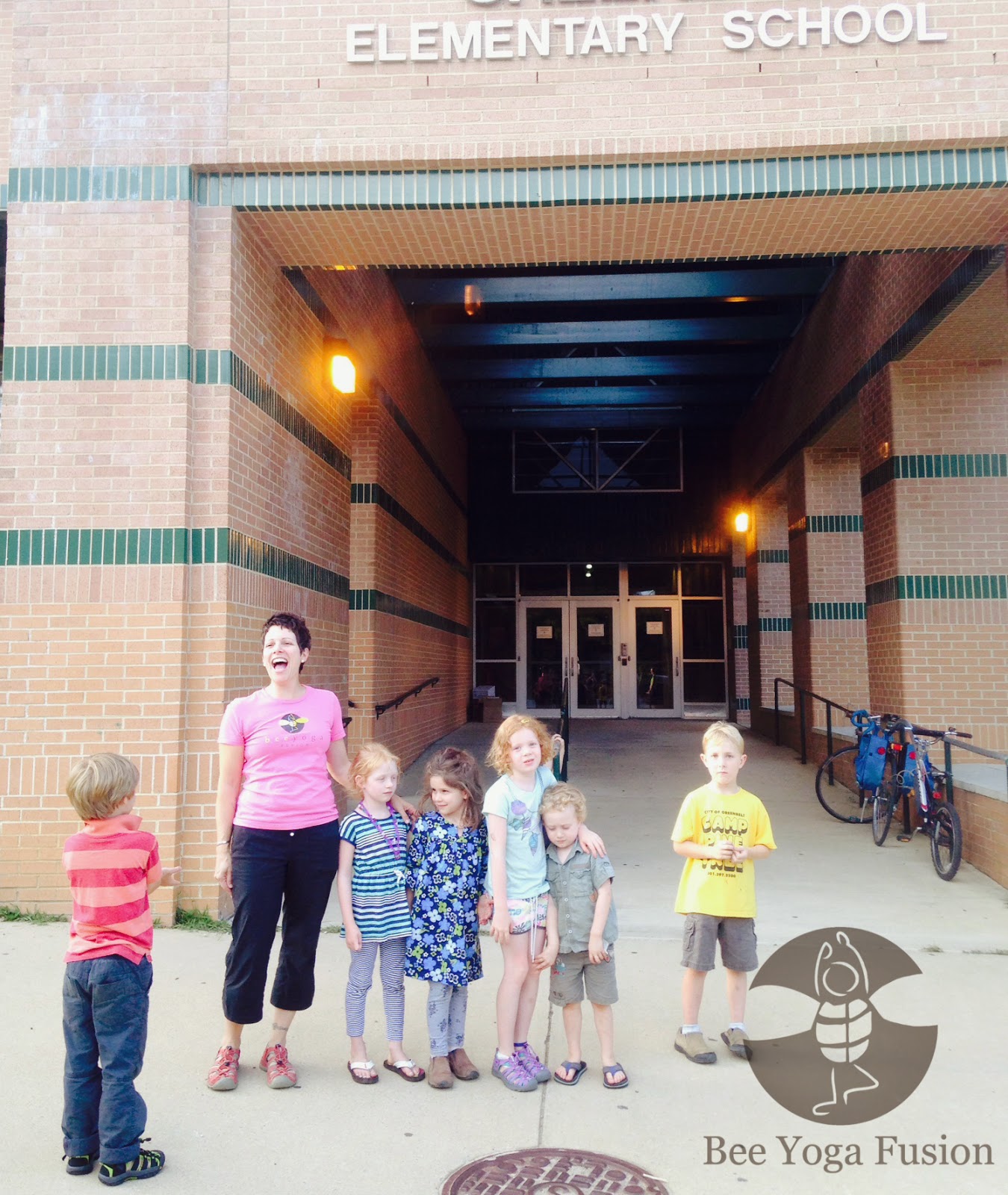 I teach a yoga class after school for elementary school aged children. Everyday I pick them up from their school and we go to the studio to practice yoga, create art and learn how to be more compassionate human beings.

Yesterday my yoga kids were talking about the latest safety procedure that they had to learn how to do that day, I immediately assumed it was a new way to do a fire drill. It’s the beginning of the school year and I know as a veteran mom to elementary school aged kids that the first month of school there are several practice runs of the fire drill so that everyone knows what to do in case there is ever a real fire. But no, it wasn’t a fire drill. It is called “Lockdown”. The kids told me how they have to “stay quiet, don’t move and go to the safe place”. I asked one of my first grade yoga students, “Why would they need everyone to go into “lockdown”?
“If there was someone bad in the school, or outside of the school.”, she told me passionately, eyes wide with a bit of fear in her voice.
“Someone bad?”, I asked.
“Ya know if someone came into the school with a gun and wanted to hurt people.”

And in that moment my heart broke a little. I wanted to wrap them all up in a hug and put them in a bubble of protection so that they wouldn’t ever have to practice “lockdown” or know that such horrible things happen in the world.

My mom has told me stories about “duck and cover”, a safety procedure that was taught to children after the Cold War for fear of an atomic bomb, children would crawl under their desks to take cover. And now in 2014 we are teaching kids how to be safe if someone comes into their school with a gun. One of my kindergarten yoga kids told me how everyone in his class piled into the bathroom and it was dark and a tiny bit scary. Each child shared where their safe space was in their classroom; some were under the teacher’s desks, others in a closet. Another kindergartner told the group that his safe space was hiding behind backpacks.

We talked about how it made them feel when they practiced “lockdown”.
Scared.
Terrified.
Cramped.
Sad.
Everyone agreed on “sad”. Sad that a “bad person” felt so much hate in their heart to hurt other people. I told the kids that when they are in their safe place they should practice their “belly breathing”. At the end of every yoga class we lay on our backs in corpse pose (Savasana) and place our hands on our bellies and focus on our breathing. Inhaling on a count of three and exhaling on a count of three. The first grader that passionately told me about the meaning of lockdown smiles and says, “That’s a good idea Gretchen. Maybe I’ll do it when I’m mad at my brother too.”