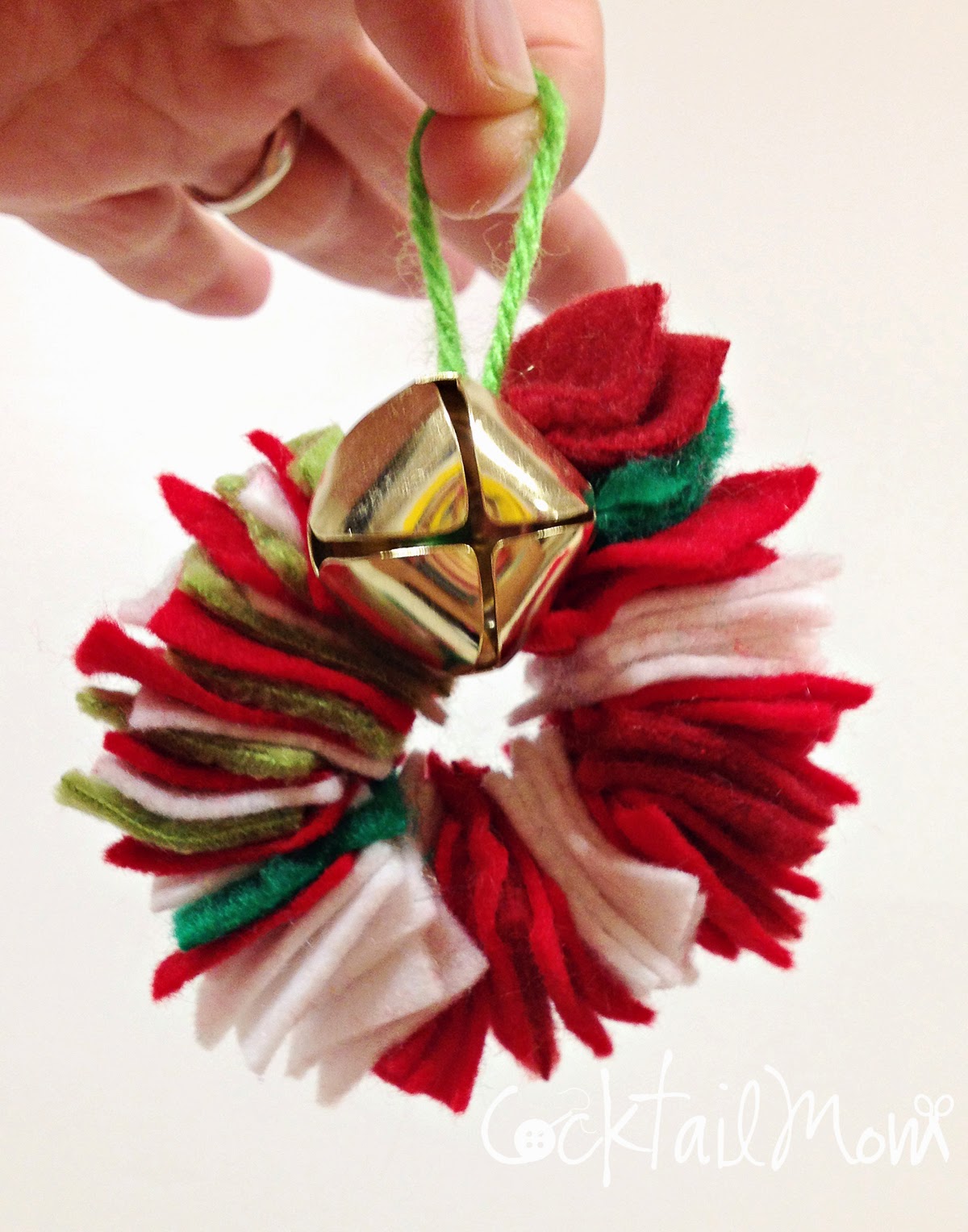 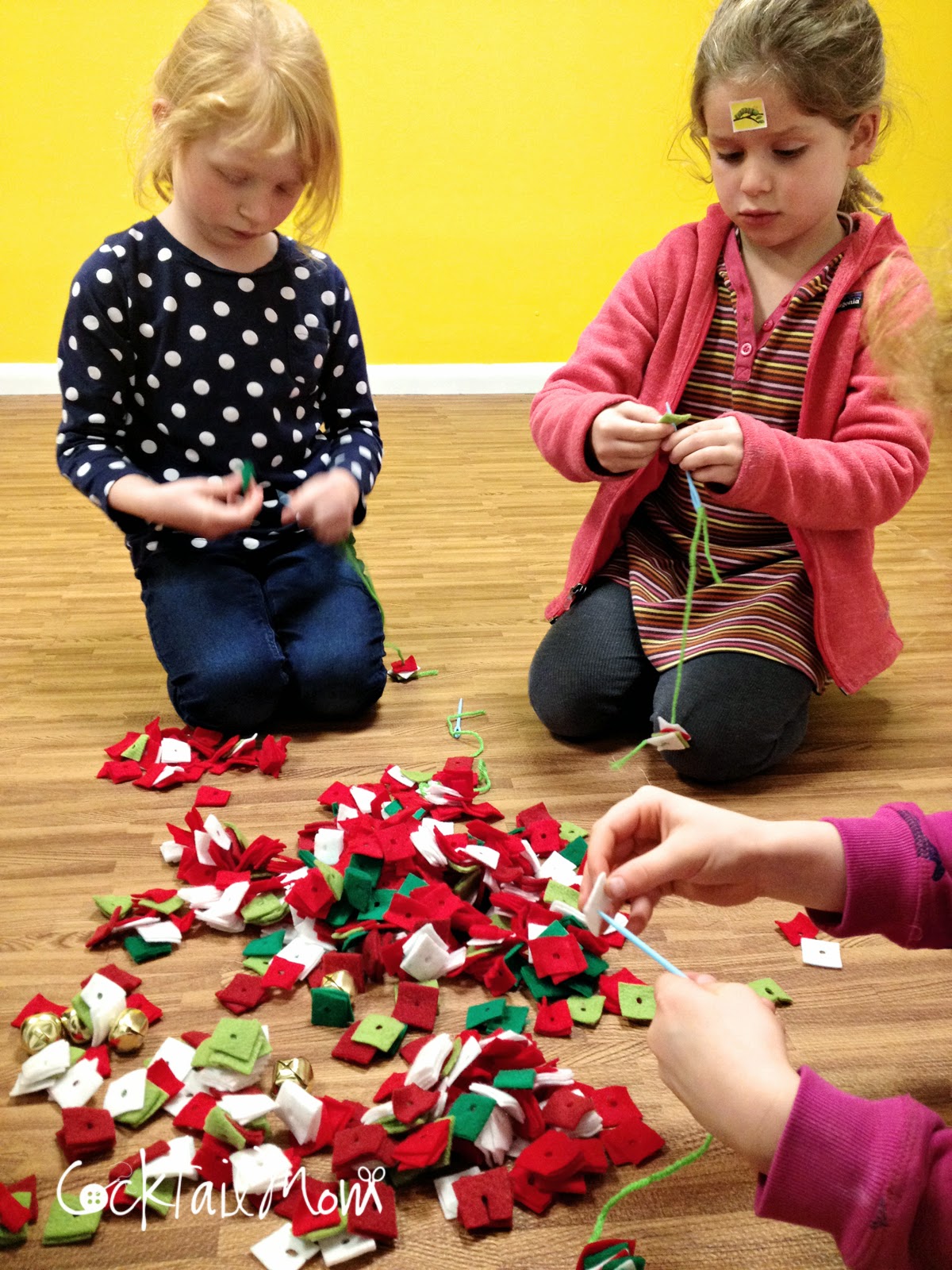 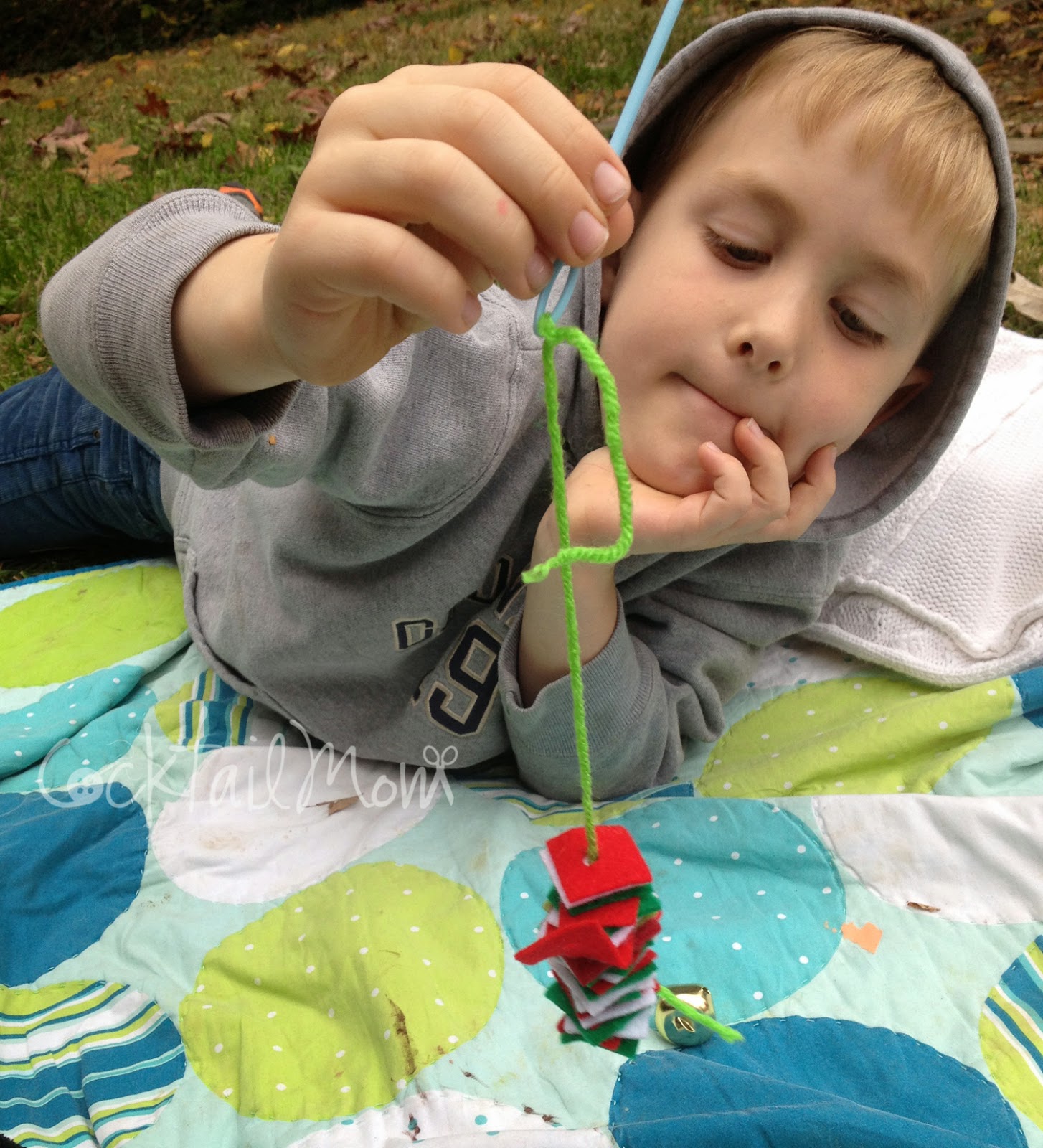 Combining fine motor activity with a craft is thrilling for me! Seriously…I love being able to have the kids create a craft while building the muscles in their hands that will lead to better penmanship. This beautiful felt wreath will keep your kids entertained longer than you might expect. So who cares that it's after Christmas…stock up for next year!

Here is what you will need:
various colors of felt
yarn
plastic needle, found near the knitting and crochet hooks at your local craft store
jingle bells
heavy duty hole punch

I prepped everything for my Yoga Kids so that they could get right to work creating and I will warn you that depending on the number of kids that you have this might take a while. Cut each piece of felt into 1 inch squares and then using a heavy duty hole punch put holes in the center of each square. This is the brand of hole punch that I use, Crop-A-Dile and it can go through tin! Highly recommend getting one to have in your crafting closet.

String a piece of yarn onto each needle and tie off the end so that the kids can begin putting the squares on the yarn. Encourage them to create a pattern with the various colors of felt. When thy have determined that their wreath is big enough tie the two ends together and secure the jingle bell at the top. With the remaining yarn make a loop to hang on the tree. Enjoy!
No comments:

Why not have your kids make their own toys today? 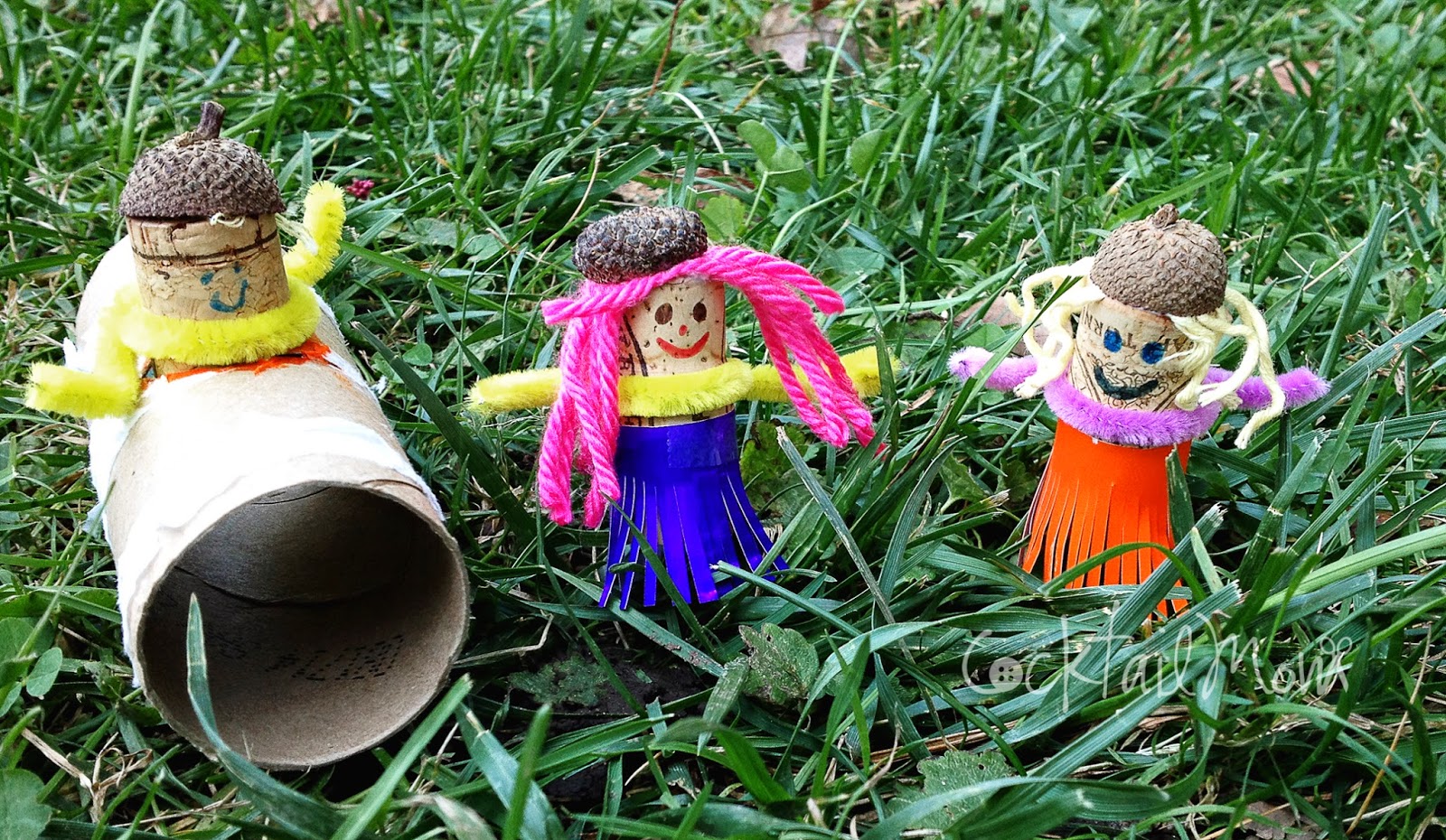 It's winter break and it's quite possible that your kids are driving you a wee bit crazy. Everyone is excited about the expectation of gifts and food and relatives visiting. Maybe you could use a few minutes to yourself but don't want to plop the kids in front of a screen?
I've got your covered!
Hand them some random items and see what they come up with. Try giving them the corks leftover from the wine your family drank the other night, some paper, scissors, pipe cleaners, markers and glue and simply tell them to make some dolls.
Dolls? They might ask.
Yes, dolls. Okay if you have boys in your house tell them to make superheros.
See what they come up with on their own. Tell them that the dolls/superheros need clothes and hair, maybe a hat to wear.
Then give them another challenge. Raid your recycling bin and tell them to build a house and a car for the dolls/superheros to use.
When you supply the items for the children to create, they instantly start using their imagination. It's amazing what they will come up with.
Go ahead…give it a try! 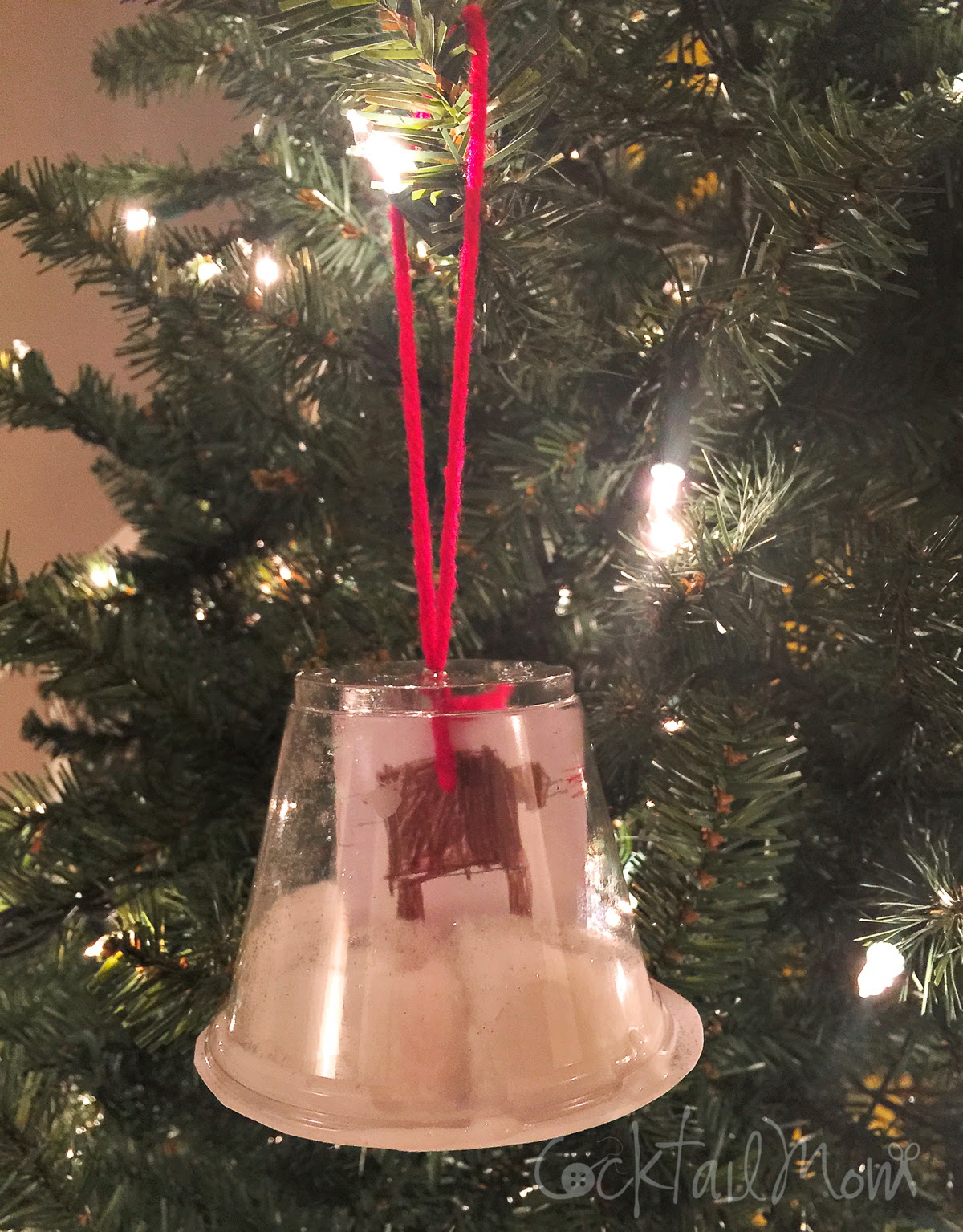 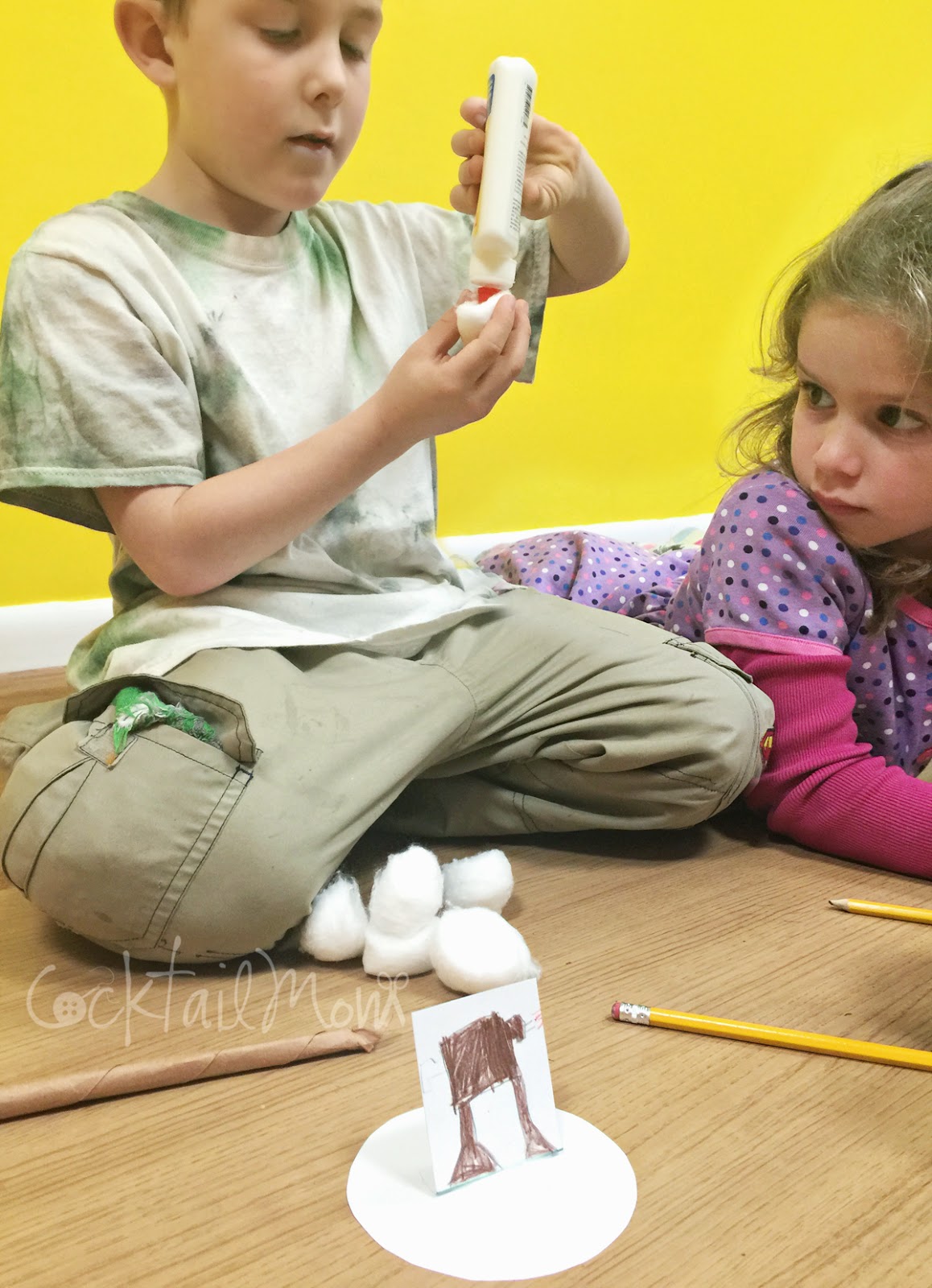 If you have small kids then your tree is probably decorated with various handmade ornaments that they had such pride in creating and presenting to you. Well I have one more to add to your tree….snow globes!

Using card stock make a circle slightly bigger than the clear plastic cup, cut out. Then cut a 2 inch x 3 inch piece of card stock for the center of the snow globe. Have your child draw a picture on the rectangle shape and fold down ½ inch from the bottom and glue to the center of the circle. Then let your child glue down all the cotton balls that they can get to fit on the circle. Punch a hole in the bottom of the plastic cup and thread some yarn through it. Sprinkle some glitter in the bottom of the cup and then put glue around the rim of the plastic cup and secure to the circle.
Hang on your tree and enjoy!
No comments: 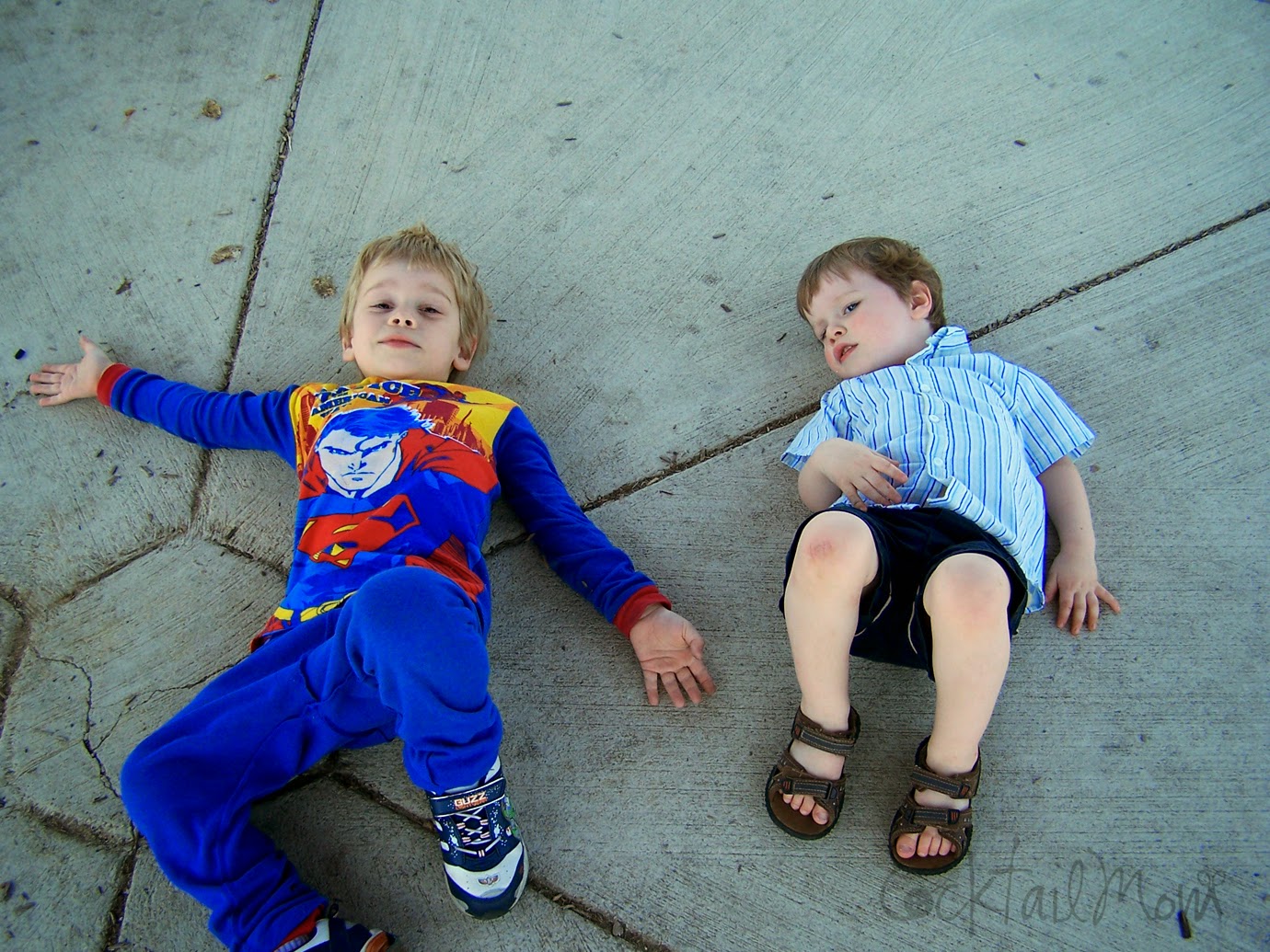 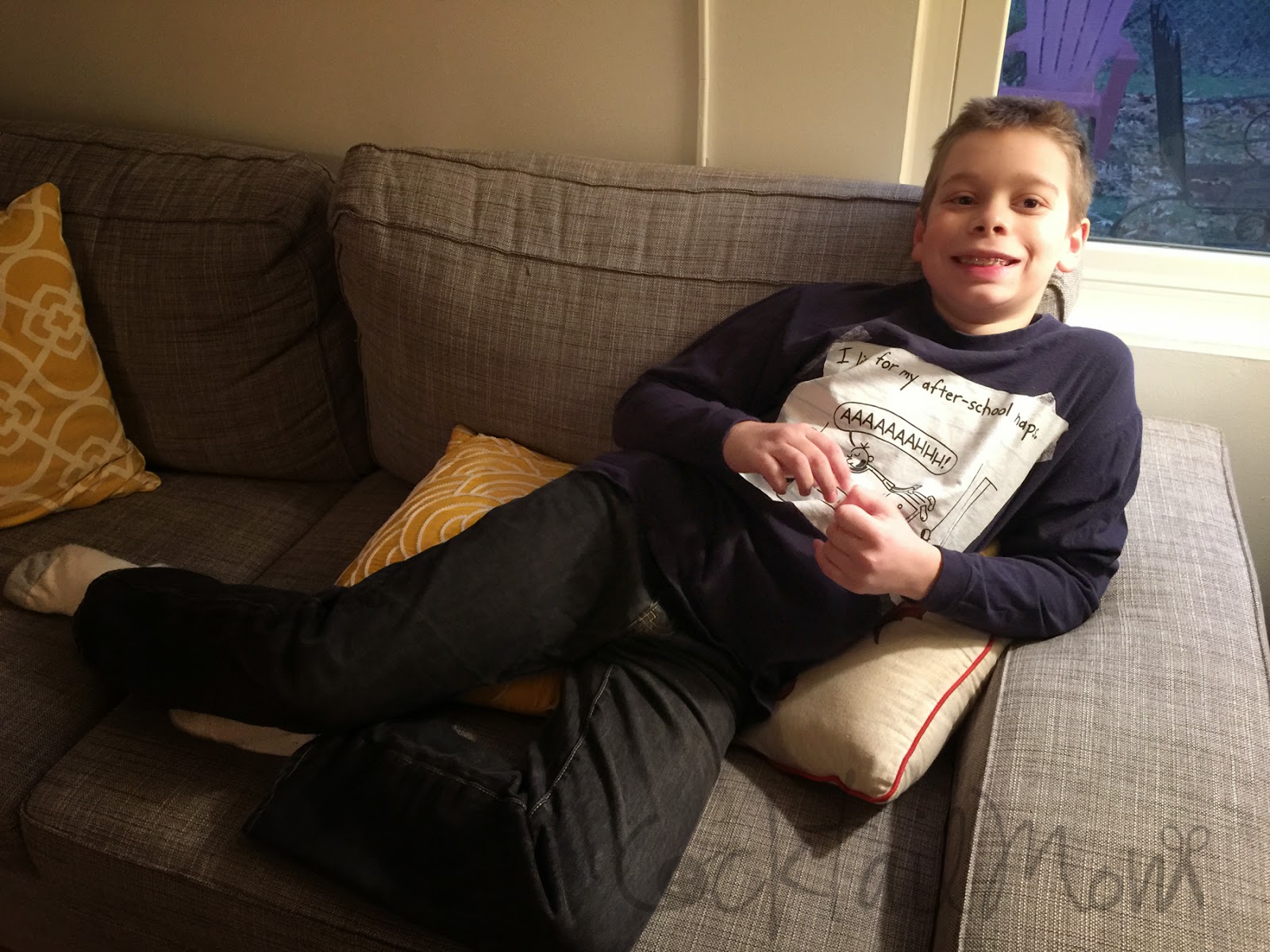 Hey Village! It's time to celebrate again!
Often times when you have a kid on the Autism Spectrum there are accomplishments that take place that no one really understands, except the people closest to you. They are small accomplishments that as the parent make you want to rent the party room, pull out the streamers, blow some party balloons and hire the clown. And in a way…I guess that's what I'm doing by writing this post.

Logan, my oldest son, is eleven years old and on the Autism Spectrum. I recently wrote about his accomplishment of being able to tolerate large groups which was HUGE for our family. It's opened doors to opportunities that we weren't able to experience before.
Well now I am here to celebrate jeans.
Jeans?, you might wonder.
Yes, it is that simple…jeans.

There was an entire year when Logan refused to wear anything but superhero long sleeved pajamas. As you can see in the first picture where his brother is wearing seasonally appropriate clothes for July in Washington DC, Logan stood his ground and wore his pajamas everywhere. You might wonder why I didn't "make" him wear other clothes. Yes, of course I tried. But until you've experienced a meltdown from a child on the Autism Spectrum please do not judge. It's beyond anything you've ever experienced. The look of pain in my son's eyes as I wrestled him into shorts and a t-shirt was as if I was lighting his skin on fire. The screaming would reach an all new octave, the tears would cover his entire red face while gasping for air all because of a cotton t-shirt and elastic waist shorts. This was the start of our day for several weeks. The meltdown would last over an hour. The pain in his eyes, that's what broke me.
I couldn't handle it.
I gave up.
I bought every pair of superhero pajamas I could find in his size. It was summer and finding long sleeve pajamas was nearly impossible. Short sleeved and short sets would not placate him. It had to be long sleeved, he insisted that his skin had to be covered in the 90 degree humid heat of DC. I found two Superman sets on clearance at Target and it felt like I hit the lottery. I called my mom in tears, having my own meltdown over pajamas, and because she has witnessed Logan's getting dressed meltdowns first hand she understood my immediate need for her to go to her local Target and buy clearance superhero pajama sets as well. Between the two of us we were able to secure a weeks worth of long sleeved pajamas. And it felt like my life became normal. Except for the fact that I got stares and comments from strangers everywhere we went, we were a magnet for parenting advice.
"How could you allow your son to wear long sleeves in this heat?"
You have no idea.

Logan outgrew the pajama phase, it led to t-shirts and elastic waist athletic pants which has been a staple in his wardrobe for the past several years. And then today he came downstairs ready for school wearing jeans! I'm not sure if the jeans were a gift or something his father bought that Logan has refused to wear and it has been living at the bottom of the drawer. I don't remember how they came to appear in our house but on laundry day when all the other athletic pants were dirty his choice was simple…jeans. And he didn't have a meltdown, he wore them proudly. I made such a huge deal about it, complementing him on how grown up he looks. Taking pictures of his outfit. In my mind I knew instantly that this would be scrapbooked in our family photo book.
My mom came over that night and fussed over him on handsome he was in jeans. I'm so glad she got to see him, that she too got to celebrate this accomplishment since she lived through the pajama phase with me. Like I said this was a big deal, a major accomplishment.
Jeans today….I wonder what tomorrow will bring? 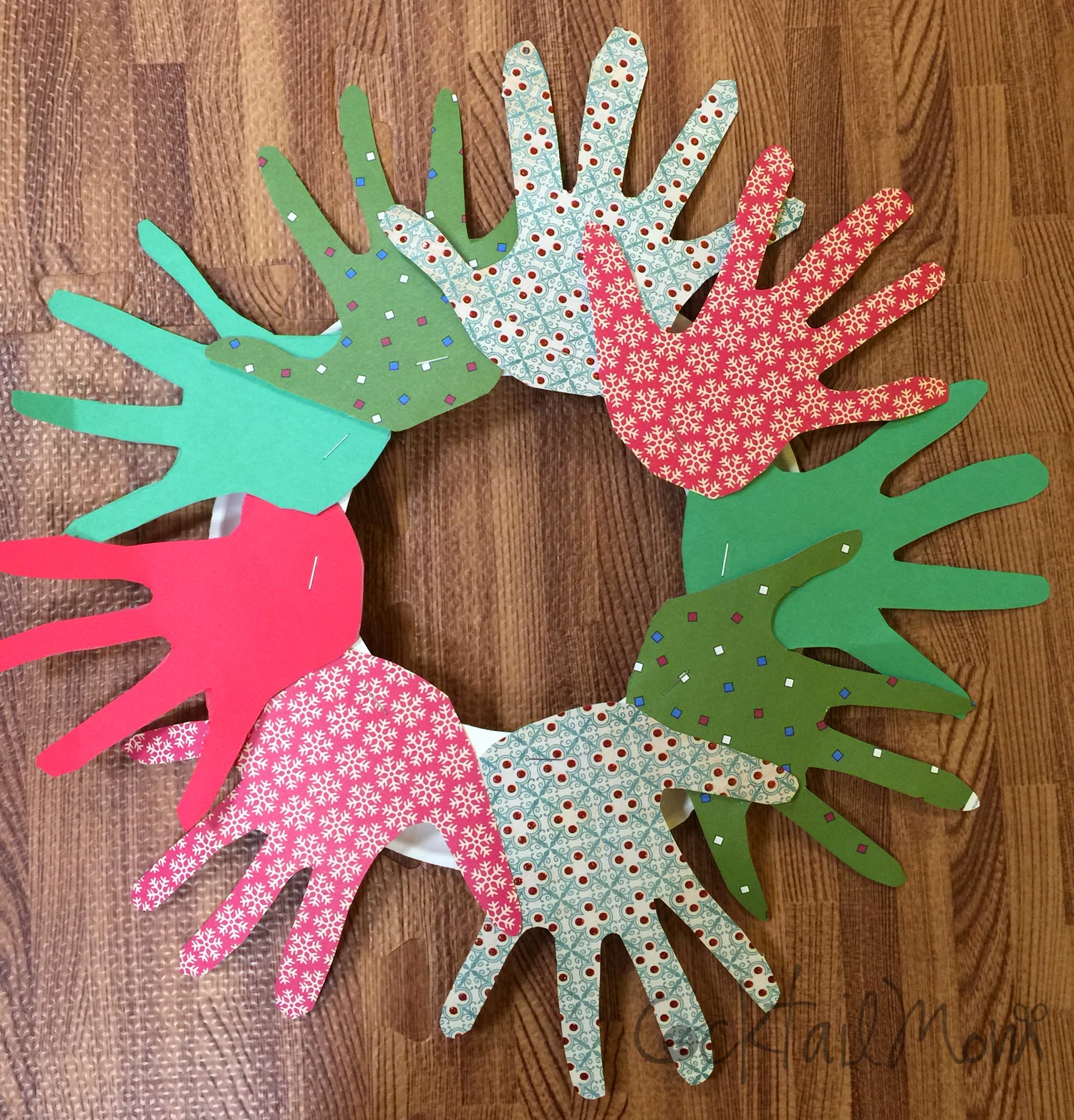 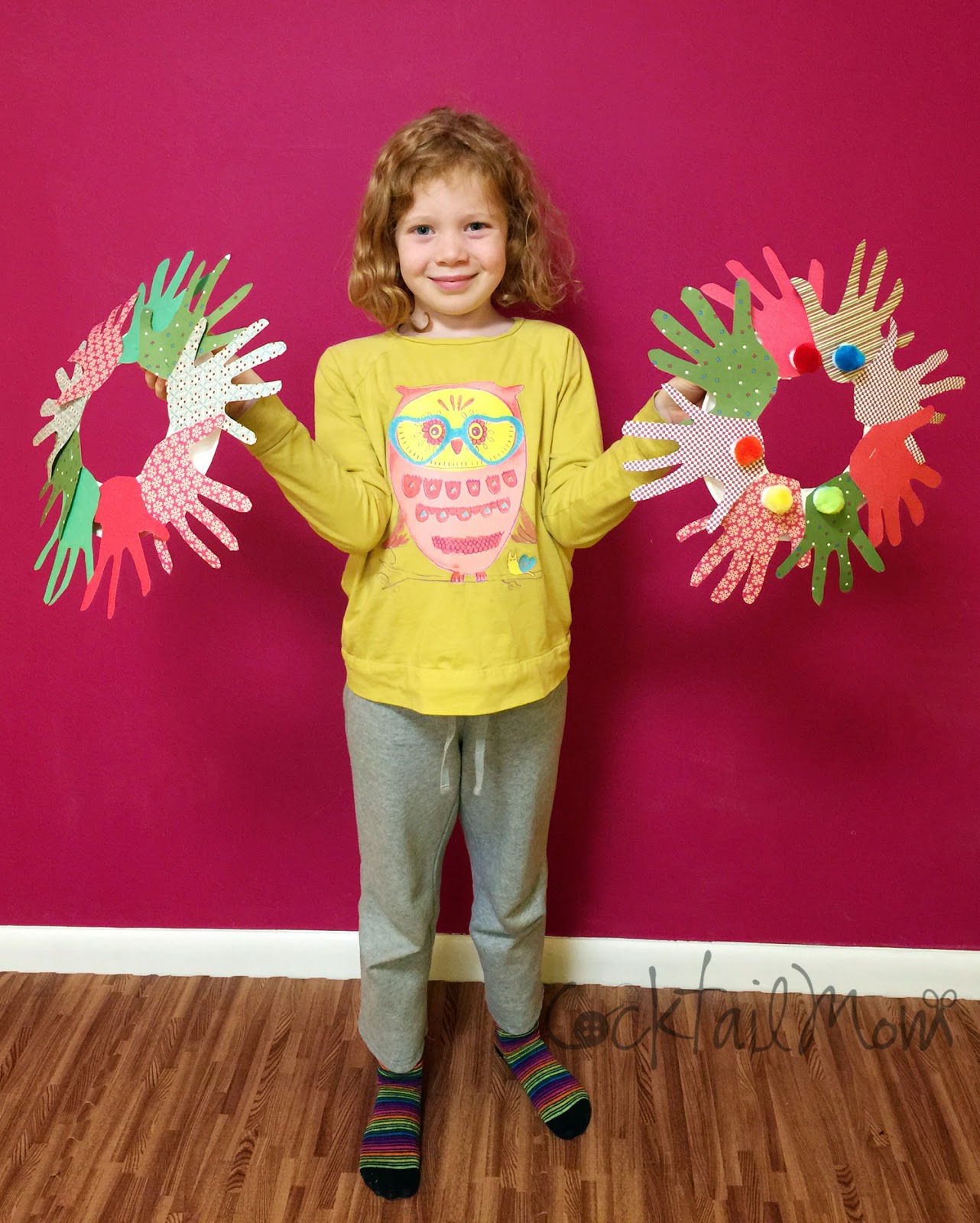 Adorn your front door with a wreath made out of your child's handprints this holiday season. This holiday handprint wreath is a wonderful, easy craft that you can make with your child in an afternoon. Simply have your child trace their handprint on various pieces of scrapbook paper and with care cut them out. Then take a paper plate and cut out a huge inner circle, staple each handprint to the paper plate. To cover each staple, glue various colored pom-poms to each staple using regular school glue. Hole punch the top and thread a ribbon through it to hang on your front door.
No comments: 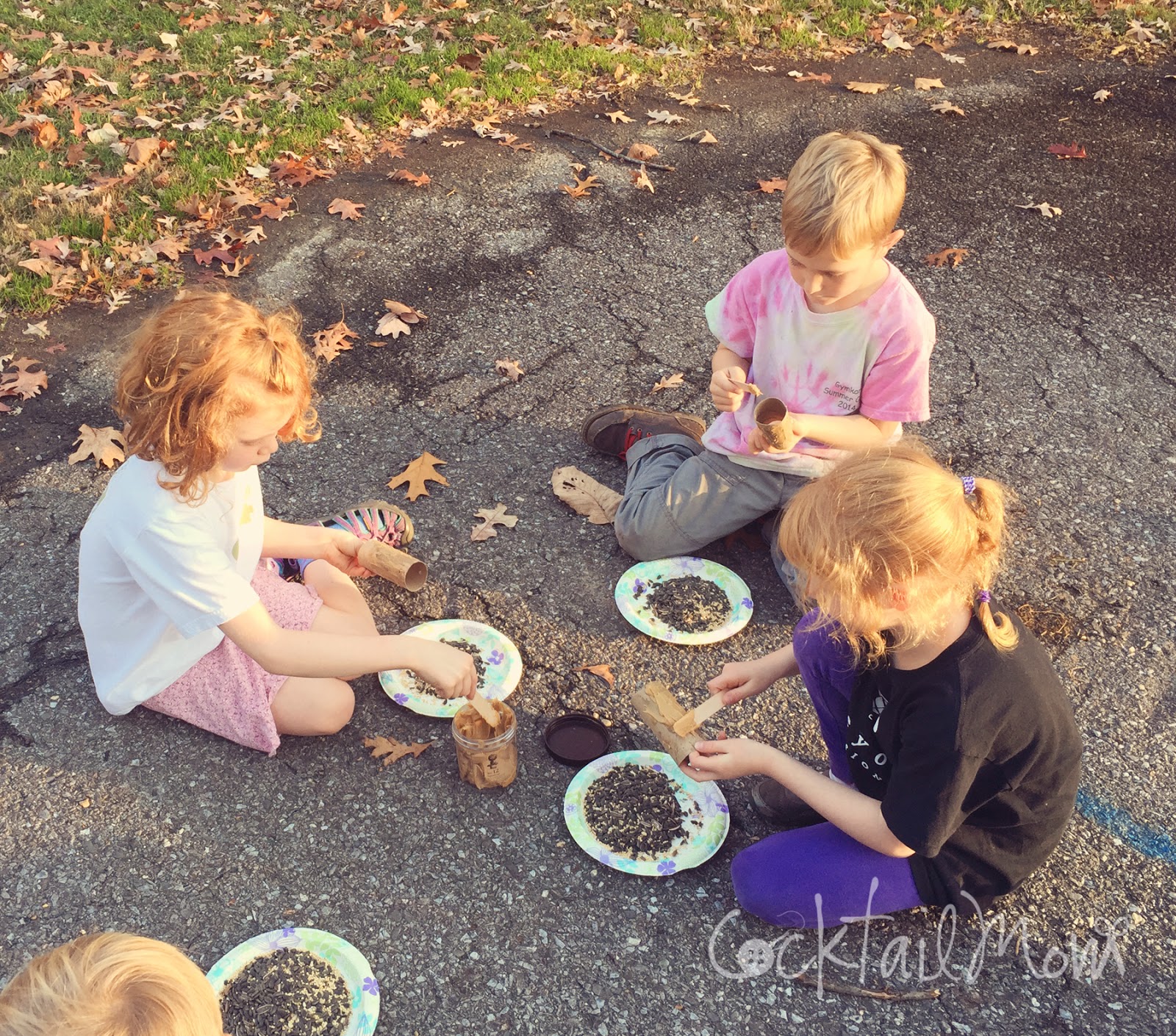 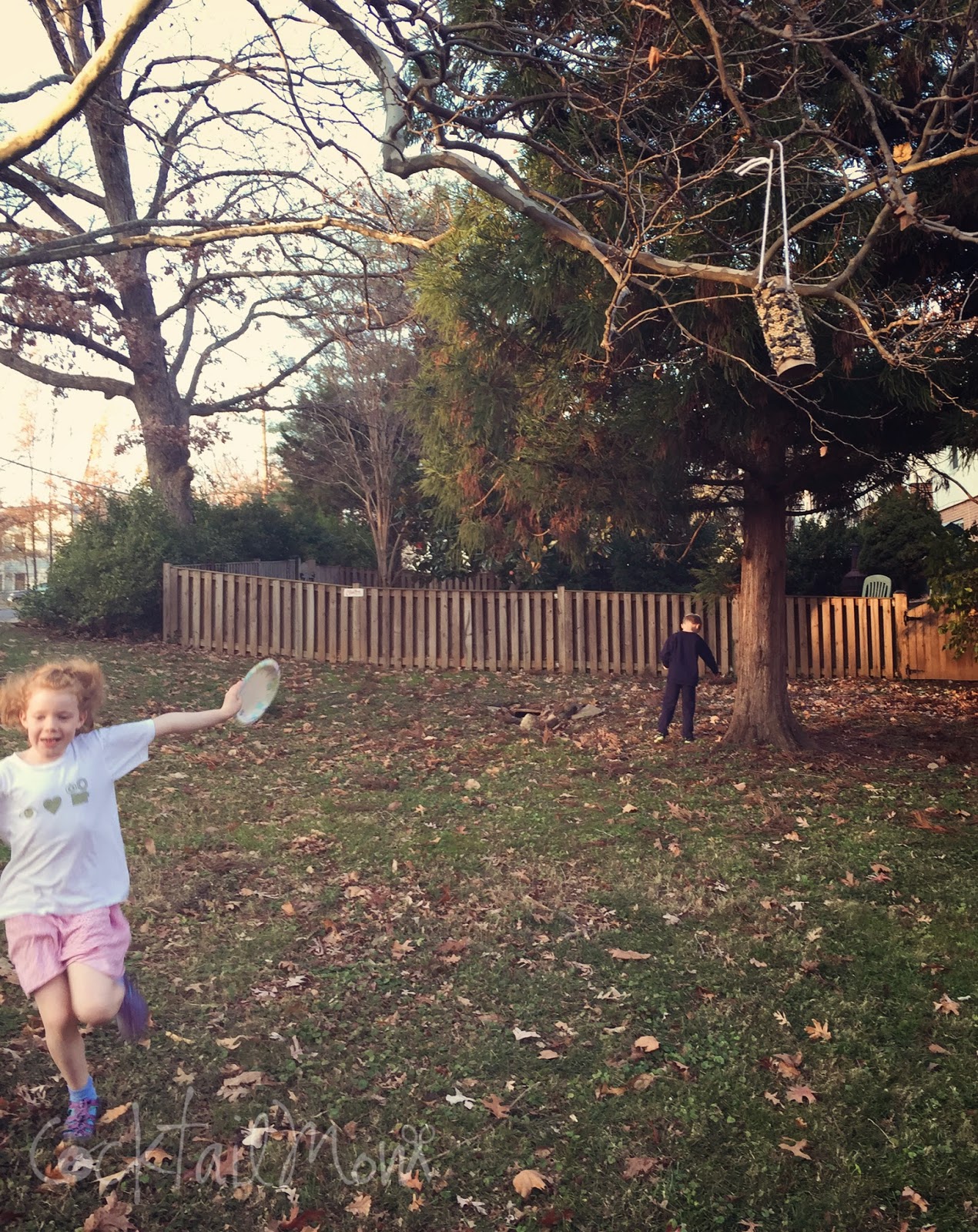 The Bee Yoga Fusion Yoga Kids LOVE being outside. We got a break from the winter jackets and decided to make winter bird feeders for our feathered friends.
This activity is great to do with a wide range of elementary aged children.
You'll need:
a paper plate and large craft stick for each child
toilet paper tubes
creamy peanut butter
wild bird seed

With our craft sticks we smeared peanut butter on the toilet paper tubes and then rolled the tubes in a plate filled with wild bird seed. When the kids were done smearing and rolling we put hold punches at one end of the tube and used yarn to hang the bird feeders from random trees near our playground.

Try this easy craft with your children and help feed our feathered friends this winter.
No comments: 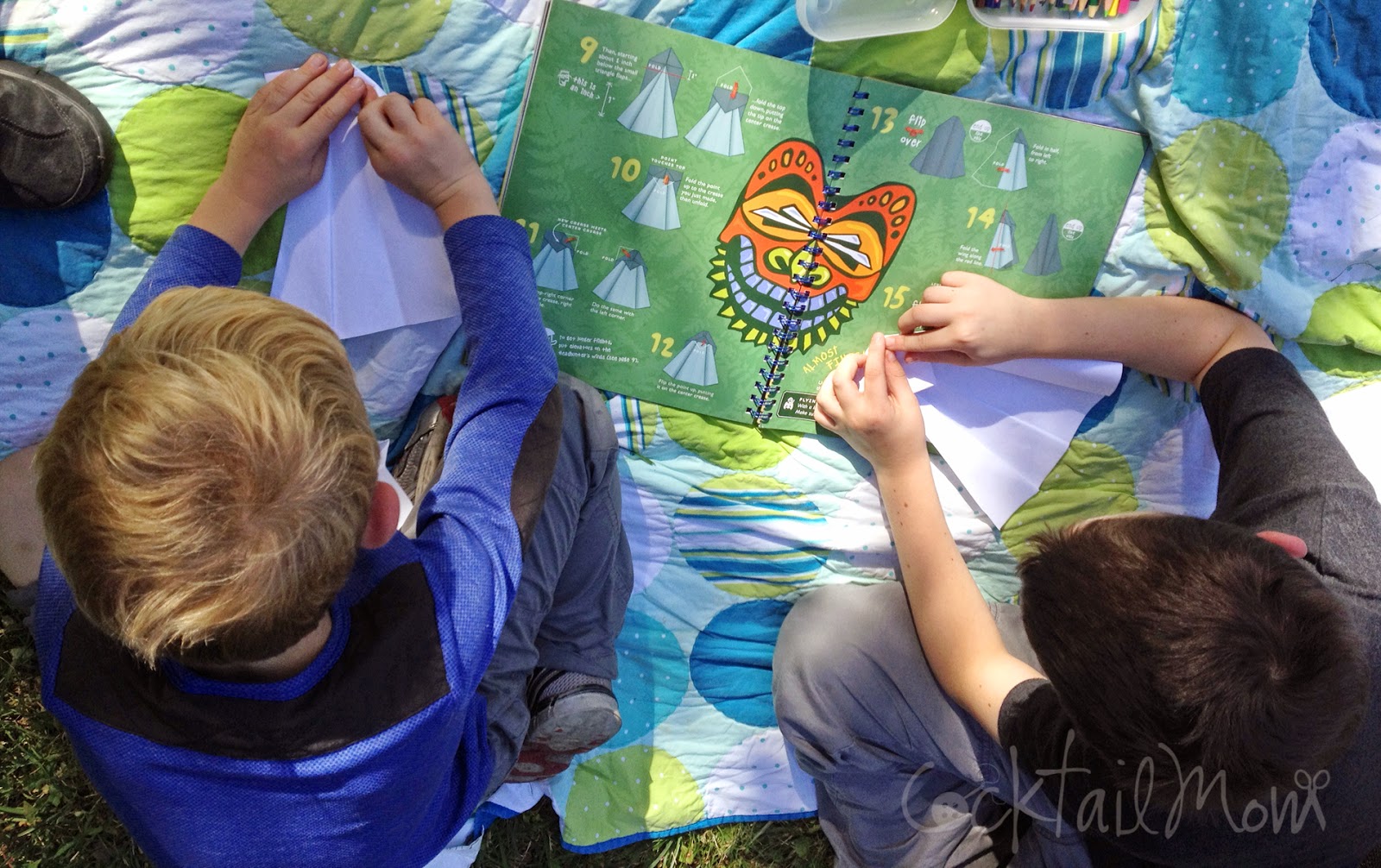 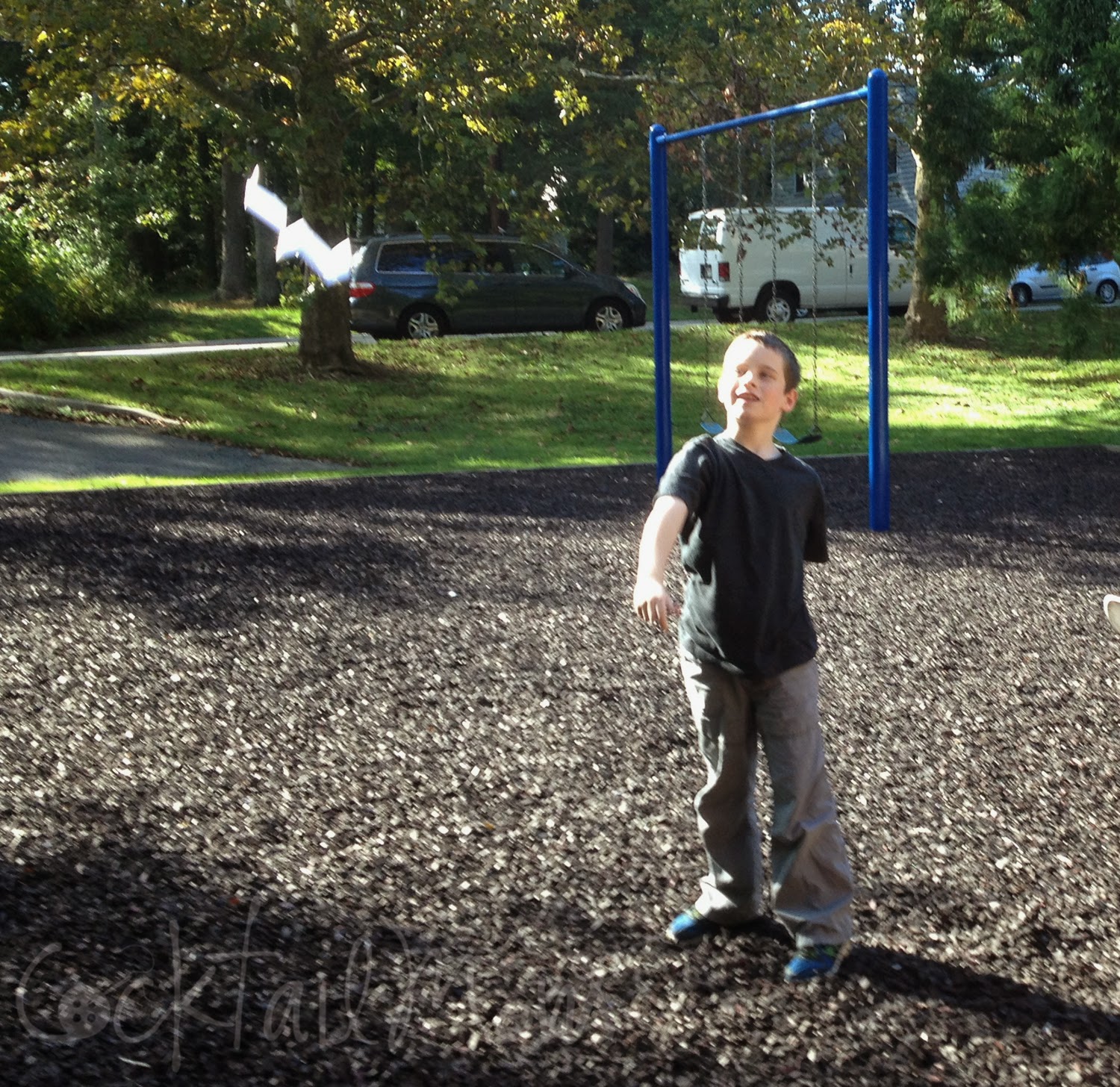 Are you searching for a creative gift to give a boy that won't be discarded like a pair of socks once he unwraps it? Something that isn't electronic and yet will hold his interest?
Order this book today and give it to every little boy on your Christmas list.

(I get nothing for promoting this book, we just love it in our house!)

Pages and pages of easy to follow directions to create really impressive paper airplanes that every boy will love. Pair this book with a ream of white office paper and get ready to have some FUN!