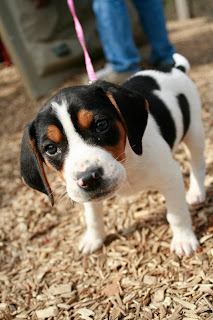 OK I promise I won't be one of those people who talks about her dog all of the time. I refuse to be one of those parents so the rule applies to the dog also.
But I have to share with you a moment I had today.
To back track a little....both times when I was pregnant and my hubby and I were making the baby name list, I always had the name Dharma for a girl. Since I had 2 boys (and we aren't having any more 2 legged kids) I stated from the get go of dog shopping that if we get a girl her name will be Dharma.
I've had a few people already ask me if we are LOST fans. Nope, never have seen the show actually. Dharma in Buddhism means the teachings of the Buddha and in Hinduism it is the principle of cosmic order. I often thought that having a child named Dharma would be appropriate because of the lessons I would learn in parenthood may not bring me to enlightenment but it would be teachings.
So it makes me chuckle to myself while following Dharma (the dog) that she may bring me closer to enlightenment.
And today maybe she did.
Today I sat outside on the swing and watched her for an hour. I didn't even realize that an hour had gone by. I can't remember the last time I just sat and did nothing. Almost all of my day is multitasking.
So who knows maybe Dharma will teach me a few things.

I want to write something eloquent about your name choice, but I can't because that puppy's sheer adorableness is just too distracting.

Gretch, I love the path you're on. This is a new you, that can really allow yourself this peace. Well done, sweetie, and well done Dharma!!