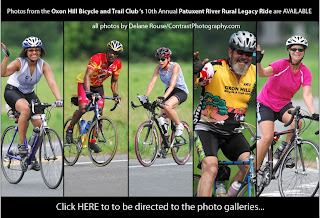 This past Saturday I finished a metric century bike ride, that's 63 miles plus 5 miles due to making a wrong turn. My parents have been members of the Oxon Hill Bicycle and Trail Club for as long as I've been alive. My sisters and I grew up going to club bike rides and being dragged to week long bike rides that my parents called "family vacation". For many years I wanted nothing to do with bike riding until my dad handed over a vintage racing bike. My dad enjoys remaking bikes, taking an old frame and outfitting it with new components. His own way of saving bikes from landfills. (that is my dad in the picture above, 2nd to the last)
And now biking has become a wonderful way for my parents, my sisters and I to do something healthy while reconnecting and spending time together.

Oxon Hill Bicycle and Trail Club did a fantastic job hosting the 10th annual Patuxent River Rural Legacy Ride. Riders chose between 24 miles, 46 miles or 63 miles. The ride was fully supported with numerous sag cars and the roads were clearly marked. The rest stops were fully stocked with yummy goodness but the best part were the views at the rest stops...breath taking. Worth spending a few moments more to enjoy them and the really cool people you can meet. The course is a bit hilly but remarkable visually. This ride repeats every year and all the money goes to Merkle Wildlife Sanctuary. And this fall they are hosting the Indian Head 100 . Haven't decided yet if I'll be doing it because I'm already signed up for a century later in the month of September...but who knows I've had crazier thoughts.

Really incredible, Gretchen. You have an awesome family!

Very nice article Gretchen. We had 360 riders on the Patuxent River Rural Legacy Ride. There was one group from PA. It was a great day.
Mom

Congrats on the major biking accomplishment! You are a multifaceted adventurer. :)

I need to reclaim my mountain bike from my boys and go hit some trails.