College Park Patch: We Will Never Take Friendship for Granted! 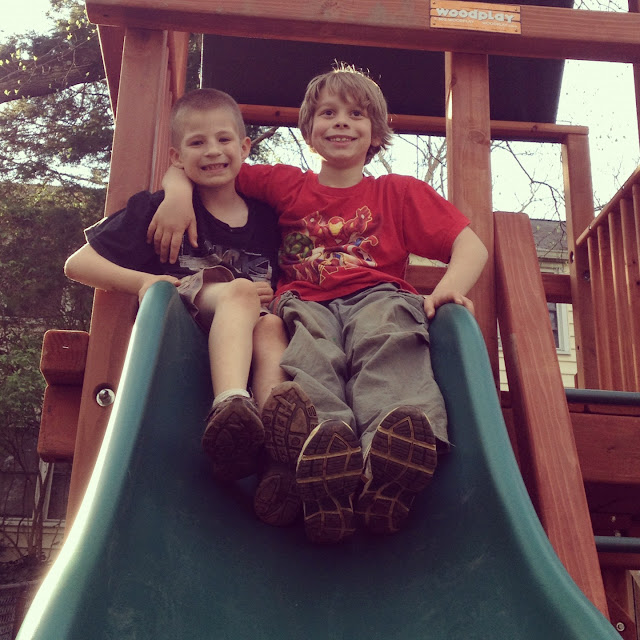 This article was originally published on the College Park Patch.
When I rounded the corner on my walk to school to pick up the kids, I saw L sitting next to his best friend B. When they saw me approach, both boys came running up. “Can B come over to play today? Please!!” L asked.

“Sure, we need to ask B’s mom or dad first though,” I replied.
B quickly interjected: “We already did—He said 'Yes.' He’s over there.”
And off all three boys went, running down the sidewalk to our house. My youngest son, Z, tried unsuccessfully to be a part of their pack. Although he plays well with older kids, it’s not the same with L and B.
L is on the Autism Spectrum and his friend also has some speech delays. The two of them speak their own language and live in a world together, and it’s hard for other kids to be a part of it. It brings tears to my eyes to see the two of them together.
For so long L didn’t have friends. He would often be the kid left out when we would go to the neighborhood playgrounds. It wasn’t because he didn’t want to be a part of the group; it was because he didn’t understand how to be a part of the group. I often would stand on the sidelines and try and help him navigate the playground politics: “L, that little boy threw the ball at you because he wants you to play catch with him.”
B has been a gift from the universe for my son. He’s the friend my son needed to cross over into the nuerotypical world. This year they are in the same class, and B has pushed him to be a part of classroom projects and activities that L would normally avoid, or they would cause him to have a meltdown. As long as B is next to him, he’s willing to try new things and interact with other children.
While walking home from school, Z grabbed my hand. “Mommy what are they doing?” he asked.
TO CONTINUE READING CLICK HERE