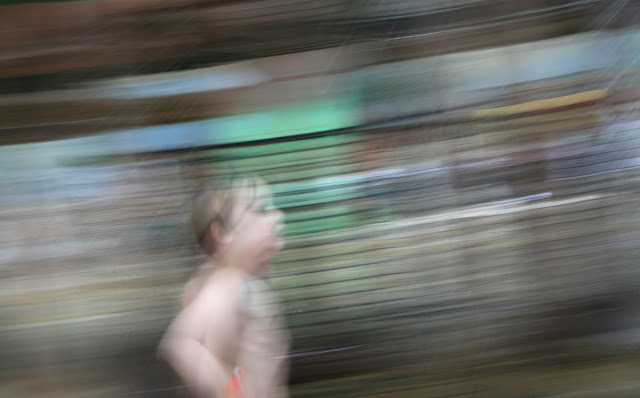 "Mommy I'm not going to drive a motorcycle when I am grown up, I'm just going to stay with you."
Logan says to me over winter break with an exasperated sigh.  He's often talked about wanting to drive a motorcycle when he's allowed (age 21).  I love motorcycles so I'm not a mom who deters him of this dream but I do believe most boys aren't mature enough till about 21 when they have slightly outgrown their need for speed and have a few years experience driving a car.
"Why aren't you going to drive a motorcycle Logan?", I reply.
"I'm just going to stay with you, Mommy.", with a deflated look across his face.
"But aren't you going to grow up and be a scientist?"
"Yes and an astronaut.  But I won't be able to drive a motorcycle."
"I don't understand why not, sweetie."
"Just cause. I don't know...I won't know where to go.  I'll just stay with you, you know where to go"
Logan begins to get this worried look in his eyes, it's a look I've seen before.  I've blogged about a previous experience with the lock on our front door.
"Logan when you are old enough you'll be able to drive a car all by yourself.  That's a long time from now though."
"No Mommy! I won't! I won't know where to go!"  Tears are now forming in his eyes, his lips are making a frown and he's trying so hard to not cry.  It seems like just yesterday when he would burst into tears and now he's fighting them back because already at 7 he's learned that it's not socially acceptable to cry and that just breaks my heart.
I sit down next to him and I wrap my arms around him.  I know that to him this is a very serious conversation and it has more to do with something else than actually driving a motorcycle.
"Logan when you are old enough we will get you one of those computers for the car that will tell you where to go.  You won't get lost if that is what you are worried about."
"One with the maps?", he asks as he wipes the backs of his hands across his faces repeatedly, a recent stemming behavior he's adopted.  "But won't I need a helper? Like ms. drew? Won't I have a helper when I'm grown up?"
"No. Ms Drew is just your helper at school.  You won't need her forever, just for right now."
"But what do I do when my brain gets jumbled up?  And I get lost and I don't have a helper?"
"You will learn how to get by without a helper, Logan.  You'll learn.  Don't worry.  And if you ever get lost we will make sure you have a cell phone and you can call me."
"okay I'll like that."
He's instantly relieved.
People on the spectrum tend to have a higher level of anxiety and often will become fixated on one fear or concern even if it doesn't affect them right now.  I know from past experience that if I don't take these concerns seriously when they happen they manifest into a larger problem.  This panic in his mind about something ten years from now will effect his awareness and productivity today, to him it's a real concern.
When he's 21 he may or may not drive a motorcycle but he will be able to get by in life on his own.  He'll learn to navigate, even if he has to use a GPS.

You handled that very well.

This is just wonderful to read-- you are just the right mom for Logan.

Just this morning, my oldest son was really out of sorts, just surly and angry, and rather than meet his anger with my own (with I'm usually so guilty of), I tried to think from his perspective and I realized there was something that he was probably anxious about in school today. When I asked him about it, his whole manner changed, and we were able to talk about it and get ready for what he would be facing today. It doesn't happen often enough, but I'm glad I tried to stop thinking from only my perspective! :)

You continue to be a parenting inspiration for me, Gretchen!

@Odie-Thanks.
@morninglight mama- it is quite an awakening of sorts when you look at the situation from their point of view. I'm trying to do more of that in 2011. that's my goal at least :)