Echolalia, it's common in our house. 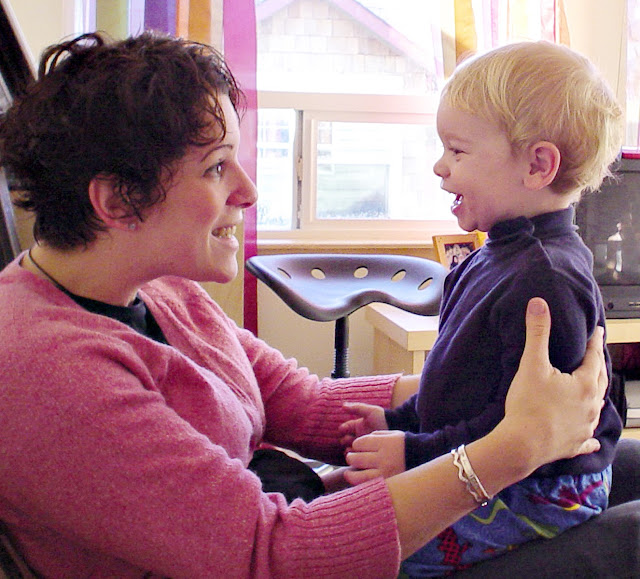 On the drive home from school pick ups Logan was quietly talking to himself in the backseat.  He does this pretty often, mumbling to himself while staring out the window.  Zane who is next to him yells out of total frustration "stop talking like you are in a movie".  Logan on que reply's," Sorry, I can't help it."
It's called Echolalia.  Many kids on the Autism Spectrum do it, repeating words or phrases.  When Logan was a year and a half he didn't talk that much compared to his peers and as the months progressed and the other kids in playgroup started to have small dialogue with their parents Logan remained at the same level of speech.  I started to voice my concern to my family and I often heard in response to my concerns how so-in-so was a late talker and some kids just talk later.  I felt like they were humoring me, patting me on the back and insisting I worry too much.  But my gut told me differently.  The difference was that Logan could talk, he would recite entire television shows word for word after watching them only once.  Once my mom was visiting us when we lived in Seattle and I remember her being astonished hearing the large vocabulary coming out of Logan's mouth.  But because she wasn't familiar with the exact television show he was obsessed with at the time she had no idea that he wasn't actually speaking his thoughts he was reciting lines.  Sometimes those memorized lines would happen to fit in perfectly in everyday dialogue, other times like "to infinity and beyond" not so much.
Once Logan started weekly speech therapy we noticed he used his memorized script less and less, he started to form his own thoughts and he finally had his own words.
He's come a long way...but the echolalia is like a security blanket.  Some days he needs to do it more than other days, some days Zane plays along and delivers the next line.  It's always on my radar when he does it, I make a mental note of the environment, trying to classify what sparked him to fall into it.  And when I ask him why he does it he typically says, "I can't help it."  Maybe it's like biting your nails, or tapping your fingers on a table, bouncing your leg up and down after crossing them.  Clearly it gives him comfort.  Maybe he really can't help it.

I am truly amazed at the ability to remember a whole show and see that as a gift. Wish I could remember stuff like that. My short term memory is awful at times.
Odie

My Boy 1 is a little older at nearly 13 (eek). We have whole conversations from within tightened lips. Goes something like this:

We do still at times have clear chats with imaginery mates such as Littlefoot, but more and more it is these humming, closed conversations.

This photo brings me back & warms my heart. I remember him having me say the same thing over & over again in the same way & he'd laugh & laugh. Interesting that in that case we were communicating & connecting and there wasn't even a word for it. Just being silly together and the repetitive sound being the link. Love him so.

Corie I love that memory. Now that we know Logan is on the spectrum it puts so many moments like those into perspective for me. I have many "oh that's why he did...." It all makes so much more sense now.