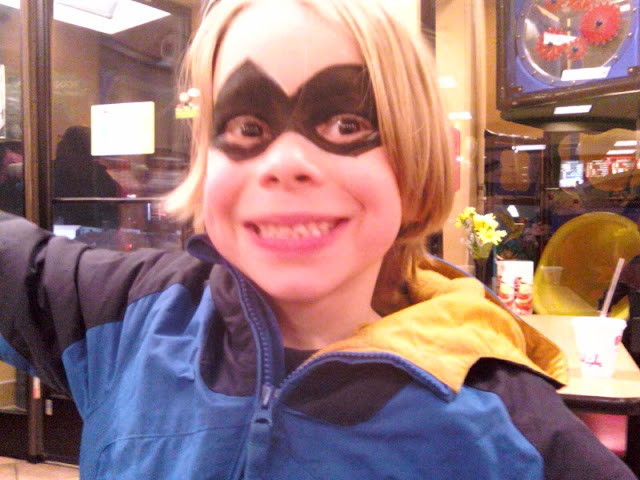 Too often I believe parents are scared of the diagnosis. When Logan was diagnosed it was because I was determined to have someone help me learn how to parent my child. The diagnosis gave me the ability to understand autism and it opened a window into my child's mind.

I have learned so much about the human spirit by being Logan's mom. I believe that my heart has gotten bigger and my level of kindness and tolerance has doubled. It's hard not to. Logan isn't equipped with filters. He is honest about everything, the concept of lying or telling "little white lies" is lost on him. He says what he thinks. I am learning authenticity from him. When he hugs you or tells you that he loves you it isn't because it's out of habit or because he knows it will make you feel better. It's genuine. It's honest. It's his truth.

If you've ever talked to a child on the spectrum about something that interests them, it's as if they know everything about it. And they do. When Logan finds a new interest he dives head first into it and seems to not come up for air for quite a while. We live and breathe that topic for weeks, sometimes months. He's had quite a few phases, butterflies, superheros (and still is) but I believe it started with trains. This was one of my first "ah-ha" moments of realizing that Logan was different from his peers. While the other little boys were just as fascinated with Thomas the Train, Logan's fascination reached a deeper level. He only wanted to read books about trains, he had every Thomas episode memorized word for word and would reenact them on his train table with his actual trains. Now if you give Logan the information in a way that his brain can understand he digests the knowledge at rapid speed. My mom bought him a plastic human body,a toy that you can dissect, possibly the coolest Christmas gift to date and Logan is completely engrossed in learning about the human body. We talk at length about bones and how food travels through our bodies. How brains work and here is the big one...how HIS brain works. He's becoming more and more aware of his differences as he gets older. And it's quite remarkable the adjustments he is making in order to live in this non-autistic world. Noise is a huge issue for him and for a while he would wear earmuffs, even in July at 100 degrees, if the noise was more than he could tolerate. Now instead of earmuffs he has decided that having long hair filters out the noise. It's amazing to me that he can tell the difference in his hearing from short hair to long hair. Think about that for a second. As a woman who's had long hair I honestly can't tell you that I noticed the difference in sound on days I wore a ponytail and on days when I didn't. The long hair I think is here to stay for awhile, he's using it to help him navigate his day to day. We were going through pictures and came across one of a horse and carriage in NYC and Logan was fascinated with the gear the horse was wearing. I explained to him why the horse has blinders on and he almost immediately made the connection of his hair in his face and how that is like blinders for him. Remarkable huh?

I'm not going to lie...I believe it's harder at times to parent a child on the spectrum than a nuero-typical child, I have both so I feel free to say that. But having a child on the spectrum in your life opens your eyes to all that you have been missing, or never took the time to notice. Logan has helped me grow as a person and I am so forever thankful to be his mommy.

Different can be pretty remarkable if you just take the time to understand it.

Gretchen,
That is such a wonderful way to describe your experiences with your son! As a mom who didn't find out her son was on the spectrum until he was 14, I wish I had been able to see things as clearly as you do at such an early age.

Thanks for sharing this with us, Gretchen. I don't have much experience with children on the spectrum, but I know ADHD inside and out, and even though those two issues aren't the same, I can understand the feelings behind this post. Thanks for helping spread awareness!

Well written - you have summed it up perfectly. I was talking to a random stranger in a crystal shop yesterday (somewhere I would never have set foot in before Boy 1) and I commented how much my child has taught me, opened my eyes to, and enlarged and enhanced my world.

Happy World Autism Day from Australia. May it be one step closer to acceptance of and education about our beautiful children.

Amazing. So incredible to learn more about autism from your stories. You are an incredible mom. Logan sounds like an amazing son. It IS fascinating how he can put things together and make connections. How fascinating. And I have to say I LOVE your last like about "different" so true....thank you

Amazing. So incredible to learn more about autism from your stories. You are an incredible mom. Logan sounds like an amazing son. It IS fascinating how he can put things together and make connections. How fascinating. And I have to say I LOVE your last like about "different" so true....thank you