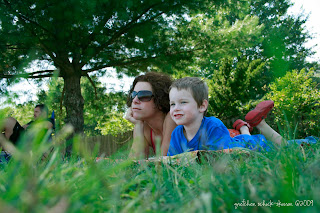 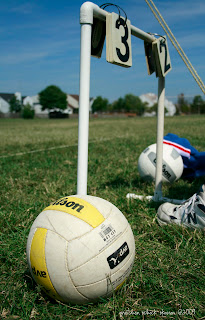 My friend Dawn loaned me her copy of Free Range Kids (and one of these days Dawn I will return it). I'll be honest I did a lot of skimming but the overall message has really stuck with me. I'm a helicopter mom. I admit it. I hover. And not to make excuses but mainly it's because for so many years I've had to help Logan navigate the playground. Some habits are hard to break, but neither Logan or Zane really need me to hover any longer.
A few weekends ago two of my friends were competing in a volleyball tournament and I really wanted to go and support them but I knew Logan would never be able to handle the environment. So Jon and I decided to divide and conquer.
And I was able to try a little free range parenting. It was so relaxing to lay on a blanket, under a tree, chatting with my girlfriend while the sound of the volleyball tournament lapped over me like waves at the beach. There was a playground but it was about 100 feet away from the blanket under the tree, Zane was begging to go down the slide. It was in a location that kids could only come and go out of one area...only had 2 or 3 other kids playing on it..I could see it clearly from the blanket...so I did what I've never done before...I told Zane to go ahead and play while I watched from afar. I've never done that. HUGE moment for me folks!! And guess what?!?! Zane and I both had a fantastic time! Slowly I'm trying to release a bit more and hover less on a daily basis. It's going to take some time, we are all still learning and growing but I'm really excited about the independent children they will become when they are ready. No rush though.

No rush on the book, Gretchen, I have no waiting list. :)

I'm glad you found things in there that were useful/thoughtful/whatever. I TOTALLY understand the need to be close for certain situations, as most of JAM's preschool years involved me being his shadow to prevent/address issues that were inevitable... but I was really able to look at this book in a different light now that he's older and his issues have changed...