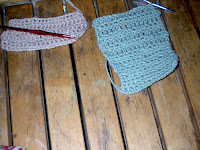 I'm not usually on the cutting edge but I will never forget learning to knit and crochet with Gretchen in order to make holiday presents for the Christmas of 2000. Our goal back then was to stop buying useless presents for our friends and family and instead give them something practical like a hat or scarf. When we started I swear we were the only women under age 25 interested in knitting needles and crochet hooks. In fact we had great difficultly finding places that sold yarn in Manhattan and had to get our moms to send us yarn from Michael's or JoAnn's from the suburbs. Then suddenly everywhere we looked people were knitting. Hip yarn stores complete with hipster cafes started popping up and before I knew it knitting was the "new Yoga".
It has been over 7 years now and I am happy to say that the trend hasn't stopped. Just this week end my dearest childhood friend Jen and her partner Allison visited me for an exciting weekend in New York City. In addition to going to upscale restaurants, visiting MOMA, and going to a Broadway Show I was exciting to find out that they had brought with them yarn and crochet hooks and wanted to spend some of their time here in the city learning to crochet. I had such a good time teaching them the basics. It reminds me of what a good lesson in life knitting and crocheting can be. When I first learned to crochet I was convinced it was impossible. That even if I figured it out that I would never be able to make anything actually worth giving to someone. But before you know (it as long as you stick with it) you have yourself a scarf. Usually the person teaching you (in my case my mom and grandma) is quite skilled and can easily make their fingers fly through stitches. Unfortunately, the first time a beginner tries to chain or make a single crochet they get frustrated. It is easy enough to watch someone hold the work in one hand, maintain the tension with the finger, and slip the yarn over the hook all at the same time. BUT TRYING TO DO IT CAN SEEM IMPOSSIBLE!!!!
The gre 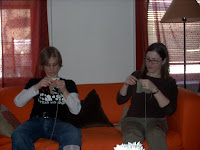 at thing is is that as long as you keep at it you eventually get it. Then the key is finishing a couple of projects - even if they have mistakes in them. In the beginning the work looks pretty ugly. The picture of the uneven work top left is a good example. But to me that work looks great because I know how hard it was for their fingers to make it and for their minds to move on to the next row even though they knew the row they just finished was far from perfect. I was so excited to be teach my friends a skill that has brought me such happiness. I hope the trend of knitting and crocheting never goes away again. If any blog readers in NYC want to learn to knit or crochet let me know ASAP. It is one of those skills that takes an hour to learn and a lifetime to master but you'll never regret it for a second.

Love that you converted Jenn and wifey to being crochet ladies! I wonder if Jenn is going to tackle the recycled bag? hmmmm....

I will never forget my trip to NYC after Gretch had Logan, and we all gathered in your living room and I learned how to crochet!! Great times. I remember thinking I could never do it, and my fingers felt as if they were going to fall off. Persistence and committment paid off, as nearly everyone in my family received one of my creations that holiday! I still love to sit and crochet, as it is one of my most relaxing hobbies! Now, if I could only tackle the knitting....