When Your Child in on the Autism Spectrum, Your Wishes are Different 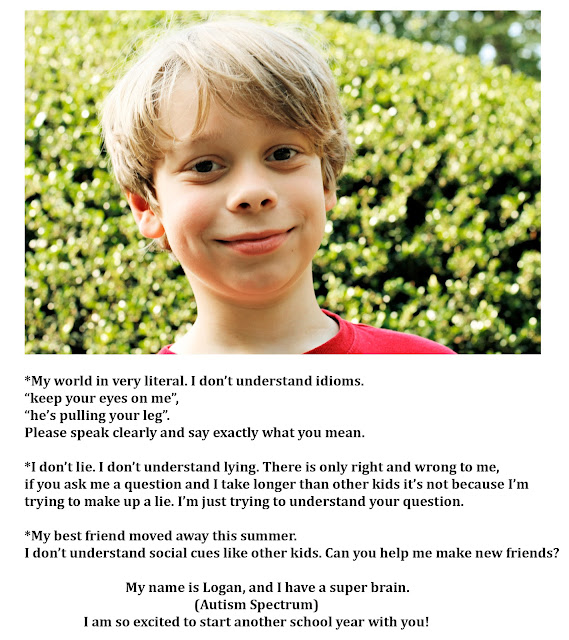 A new school year means many things for different families. New backpacks line the entryway, parents are getting up earlier to make lunches and lazy summer evenings have been replaced by homework.

Another school year means educating the new staff at Logan's school on how to interact with him. Logan is a bit of a celebrity amongst the returning staff at his elementary school. The school doesn't have a plethora of children on the Autism Spectrum and I think because Logan is high functioning without any behavior issues he's viewed as the "golden child of Autism". He's affectionate, doesn't disturb classes with meltdowns and his stimming behaviors go unnoticed because he doesn't flap, or turn in circles. That doesn't mean that he doesn't do stimming behaviors, its just not a disturbance.

Every year I make a simple print out with a picture of Logan and a few tips to help them understand Autism, I place it in each staff members mailbox in the school.
This is the what I created last year.  I used most of the same wording for this year's card but added what they call in the fundraising world as the "ASK".

Logan's best friend moved to North Carolina this summer and he doesn't really have any other friends at school. He doesn't understand social cues like other children do and he has a very hard time making friends. So my "ASK" this year: Can you help me make new friends?

If only a teacher took a bit more time to introduce him to another child in his class, suggesting a game they might play together.
If only a parent talked to their child about reaching out to Logan and asking him to play during recess because Logan doesn't understand to do it himself.