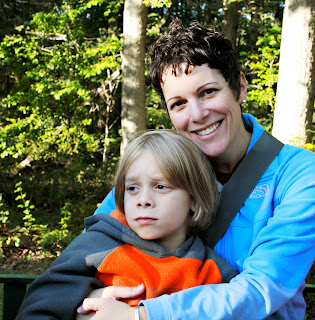 Almost weekly Logan has a new career that he wants to be when he grows up.  Previously his career dreams lasted much longer, we had an entire year of him wanting to be an engineer, then he dreamed of being a scientist and the longest running dream career has been an astronaut. Which recently was overthrown by bounty hunter.

Walking home from school I asked my usual banter of questions to the boys, “did you do anything fun today?”, “what was your favorite part?”, “who did you play with at recess?”. Questions that I use to get them talking about their day and filling me in on details I wouldn’t know by looking at the contents of their backpacks.
Logan interrupts the flow of the conversation and says, “Uhm, Mom…I changed my mind. When I grow up I want to be a solider.”
“Yeah? What do you think would be neat about being a solider?”, I replied intrigued by this recent career choice. We are not a military family. We don’t actually even know anyone in the military. He doesn’t have a cool uncle in uniform that he looks up to that would explain his desire to be a solider.

“I’d get to carry a gun”, Logan informs me with a smirk on his face. “And wear green.” (His favorite color) “And drive a jeep. And stand like this.” He stops in the middle of the sidewalk and puts his right hand by his brow, legs squeezing so close together that he’s teetering on falling over.
“Mom, would you hang a flag that shows you have a loved one in the war if I was a soldier?”
“Yes of course I would.”
“On the outside of the house?”
“Most definitely.”

Logan interlaces his fingers in mine, and we walk holding hands for a while he then looks up at me. I smile and this wave of emotion comes over me in the look on his face. His brow furrows, as it often does when he is deep in thought, “would you be proud?”.
“Logan, I will be proud of you no matter what career you choose…well as long as it’s legal.” I smile at my joke, which is wasted on the eight-year-old.

He stops walking and his brow continues to furrow as he stands there in the middle of the sidewalk looking down at a crack. He has always been such a serious child, he had this same furrowed brow as a baby. He takes what seems like a large breath and puts his right hand on his chest and looks at me and says, “I’d sacrifice myself for another good man at war.”
I inhale and my eyes begin to fill with tears. I stumble over the words, “I know you would.”
“It might mean I’d die”, he says sounding so serious as if tomorrow he’s enlisting.
“I don’t like the sound of that.”

He interlaces his fingers with mine and we continue our walk in silence for a while. His words are replaying in my head. How did he learn about this? Where is this coming from? This is the child who I had to teach how to observe other people, for months I sat at the dining room table with flash cards trying to teach him facial signs of emotions. A child that use to be completely tuned out, now has this amazing insight.

We walked a good while without a word being spoken, each of us in our own thoughts. Logan breaks the silence and says, “Or I’d come home with one leg. And then I’d need a fake leg.” A smile spread across his face. “That would be so cool! I’d invent a robot leg and it would have shooters in the back…oh and jets on the back right here.” He points to the heel of his shoe. “Just like Iron Man!”
And just like that my eight-year-old son brings us back to reality. I wipe the tears away that sneak down my cheeks and smile looking down at my son who instantly is enraptured with the design of prosthetic war legs.

And my heart feels full.