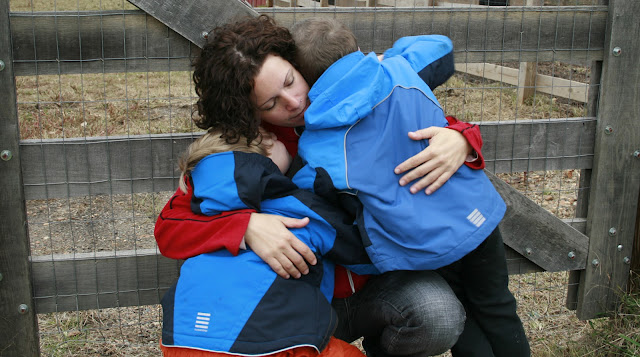 This article was originally published on the College Park Patch.
“It’s not fair,” whines the six-year-old as I inform him it’s time to brush his teeth and get ready for school.
I exhale, louder than I anticipate, and reply: “I know it’s not fair that I care so much about your teeth and your education. It must be difficult to have such a caring mom … Now go brush your teeth.”
I reach over and give him a tickle while trying to corral him up the steps. He drops to his knees and says again with a hint more of frustration, “No, it’s not fair that we don’t see Daddy!”
I stop in my tracks. Clearly this is not a power struggle about the morning routine and instead a bigger issue. Even though we are running five minutes behind schedule, I sit on the step and reply, “I don’t understand? You see Daddy every other week. Last week was Daddy’s week and this week is Mommy’s week.”
“But it’s not fair for Daddy. You get to see us all the time and he doesn’t.”
My children are growing up in a divorced family; their father and I share custody on a weekly basis. The only difference is that I take the boys to school and pick them up from school every day, even on their father’s week.
I try my best to explain: “Last year, you guys went to before-and-after care, but this year since I have a different job I can pick you up and we can do fun things like go to the playground and play with your toys, instead of having to spend even more time at school.”
I am choosing to only work when the boys are in school so that they don’t have to endure daycare. Last year when my work schedule involved a long commute, I would pick up my oldest son, who is on the Autism Spectrum, from daycare and I would find him in a corner, crying with his hands over his ears, eyes puffy and red, because the level of noise was too much for him to endure.
And my heart would break, every single time I had to see him struggle in this environment and wake up with anxiety about going there again.
To continue reading click here.