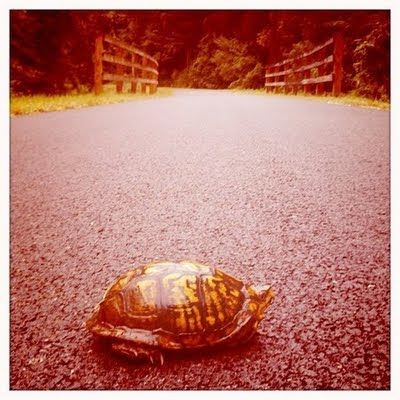 I was raised in a house full of pets. We had birds, and it seemed that as soon as one died we had a replacement in the cage, their color being the only differentiating characteristic.
Each one learned how to sit on the edge of my dad's beer mug or perch on my mom's finger and sing. I wasn't that interested in them, and I was immediately turned off by the mess they created. My sister had a floppy eared rabbit that was gigantic, as large as a beagle. He also had a fear of heights. Picking him up resulted in scratches covering your forearms. But we did it anyhow.
When I was 13, a friend's dad was closing his pet shop and needed to unload some baby turtles. I begged and pleaded with my parents to let me have one and eventually, they caved. I had never expressed interest in turtles before, and they must have fully expected the "I told you so" moment when I would invariably become bored of such a pet.
That day never came. Sam, the turtle, was a fixture in my life. She was a boring pet; turtles in their nature are not very exciting. But for whatever reason, I loved her.
She went to college with me, and afterwards we moved to NYC together to launch a struggling acting career -- me, not her. She made the cross country trip to Seattle sharing a backseat with a terrified cat and a whiny six-week-old baby. She moved from house to house on the West Coast, never aware of the change of scenery beyond the glass walls of her tank. Again she endured the cross country trip back to the East Coast, this time on a plane, each of us coming full circle in our lives.
My boys were fascinated with the unusualness of her as a pet. I think they enjoyed the bragging rights surrounding having her tank in their room.
One day last week I returned home and found Sam dead in her tank. The boys were with their dad at the time, thankfully. My heart felt like it literally dropped in my stomach. The tears flowed for hours. I never would have imagined that I would feel this much emotion surrounding the death of a turtle. But she was my turtle, my "I told you so" pet for 22 years.
I am sure the passing of one of our dogs will be more traumatic for the boys than Sam's death. Then again, their room looks pretty dull without the glow coming from Sam's tank. Maybe they will miss her, but undoubtedly not as much as I do.
How have you explained the death of a pet to your children?

AHH! So sorry for your loss. When we put our cat down I had no idea the impact it would have but as I sat there on the floor of the vet's office with him and cried it finally came to me - I had cared for this (psycho) animal for years and even through all the drama of owning a (psycho) cat I still loved the little critter. Luckily our oldest was still pretty little and was able to move on (we think) pretty quickly.