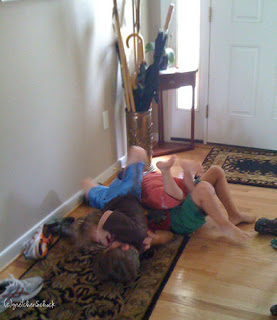 Driving in the car, the boys are strapped in their booster seats in the middle row of the minivan. We are discussing our plans for the week and enjoying the view of our neighbor's beautiful yards. There is a lull in conversation as we pass one house with kids enjoying a trampoline in their front yard, and I’m half expecting one of my children to begin begging to have one for our yard. But instead I hear…
Z in a hushed voice, "Punch me in the face. Come on I won't tell!"
L responds, "No, Mom is here. I'll do it later. You're just trying to get me in trouble.”
Z, “No I’m not!”
Fast forward to later in the evening. L has clearly kept to his promise, and Z comes to me pretending to cry.
“L punched me in the face!” he said.
I’m amazed he thinks this is actually going to work.
“I heard you ask L to do it earlier,” I respond calmly.
“But not that hard!” he said.
Boys. I just don’t understand them.
Gun fascination aside - I’ve accepted that I will never understand that aspect of them - why do boys insist on physical violence to entertain themselves?
You get a group of boys together, and at some point there will be shooting and punches.  Both of which start out as pretend. Then someone takes it too far, and we have a full-on fight.
As a child, I remember the boys in my neighborhood doing the exact same thing.  And now as a mom to two boys of my own, I’m experiencing it again, this time up close and personal.
We don’t have a coffee table for fear of someone cracking their head open during a wrestling match, which has happened and resulted in a trip to the ER. The throw pillows that I took such care in choosing for the décor of the house are often weapons of choice. A family get-together with grown men who still put each other in headlocks and punch each other in the arm is proof that I need to be the one to readjust - clearly things won't be changing with age. It's obviously in their DNA.

Best way I know to explain it is that there is a desire built into the male to be the protector of his family and this is sort of a training as you go to prepare for what may come later. Don't want to make it seem to noble but a guys got to have fun and sometimes that is the way too.