College Park Patch: To Tell or Not to Tell...That is the Question! 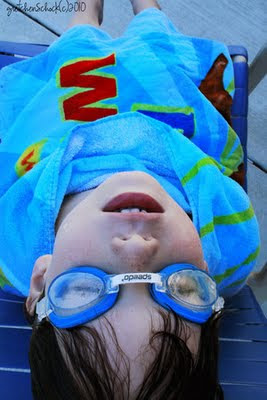 This article was originally published on the College Park Patch as part of the weekly column by Gretchen Schock, Parenting on a Tightrope.
I am torn on this matter.  My son is very high functioning, and thankfully doesn’t have as many public meltdowns as he did in previous years. Nor does he have any behavioral issues. But would his instructors benefit from knowing that he is on the Autism Spectrum?
I don’t know. In some instances, I have told the instructor and I’ve noticed that because they are aware of his difference they treat him differently; they allow him to get away with laziness. They don’t push him to try hard or to participate, and I am left on the sidelines feeling frustrated that I just paid good money for him to pick paint off the wall while the other children are participating in the class and learning something.
When we first moved to Maryland, we were living in Anne Arundel County. I signed L up for t-ball with the hopes that he would meet new friends. When I told the volunteer coach, also a father to one of the kids on the team, that L was on the spectrum, he didn’t seem to know what to do with that information, and wound up treating L exactly as he did the other kids. He was the type of coach that yelled and demanded t-ball be taken seriously with crunches and pushups before every practice. Needless to say, L was not a fan and would often be in the field running away from the team.
A friend of mine who is a dance instructor came to me asking some advice on how to deal with one of her students, who was showing clear signs of OCD and may also be on the spectrum, given some of her other behavioral issues. My friend thought that if the child was diagnosed, that the parent would have said something to her since she is the child’s instructor.
It made me think … what would I do now?  We haven’t had any new experiences recently where I have had to deal with this issue. It's a really fine line. I honestly don't tell people unless I feel that it would better serve L or make his experience better.
Maybe your child isn’t on the spectrum. Maybe your child has an ADD or ADHD label, or maybe your child is just a runner or screamer or is in a biting phase.
Do you wait until a situation presents itself to say something, or are you honest and up front about it from the beginning? Are you worried that he/she will not be treated equally?

I was told by a therapist years ago that there are times I should tell and times I shouldn't. We have had only one really really bad incident. Most people "get it". But it is hard when your son turns 12 and grows to almost 6' and 200+ lbs. His uniqueness can be more striking because the behavior doesn't match the body. He is 15 now. We take it one day at a time.