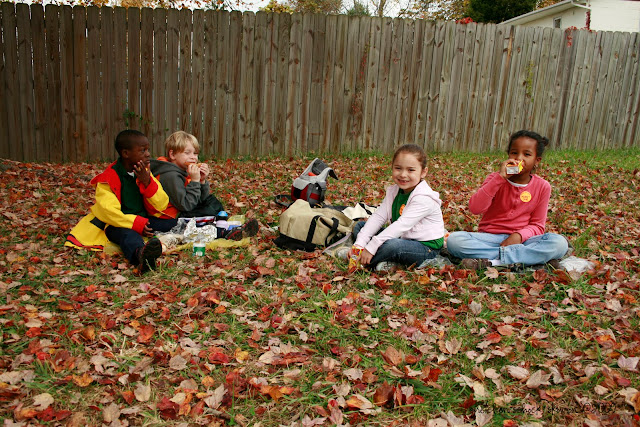 I recently chaperoned a field trip for Logan's class to a petting farm. I was stunned when we got off the bus and was informed by the teacher that I would be on my own with 4 kids for many hours, if I would have known that I would have had that extra cup of coffee! But in the end we all had a great time, I came and left with the same four kids..that's a good sign, right?
My kids were awesome, so well behaved and ready to learn and have fun. I was shocked when I found out that they never experienced a picnic before! How could that be? Logan was happy to show them how it's done, to take the lead and clearly show a side of himself that he rarely does in school. The most interesting part of being around his classmates, was that they were finally able to ask questions about Logan to an adult who actually answered them. For example one girl on the bus asked "Logan's mommy why doesn't Logan like it when people touch him?" Another kid asked "Logan's mommy why does Logan not make sense sometimes?" I took the time and answered each of their questions, with Logan right next to me I would try and engage him in the conversation to teach him how to answer these questions for himself. It was amazing when Logan answered the boy about not making sense sometimes by saying, "I talk like that when I'm really excited!" He's beginning to understand that he's "different", he sits on a special cushion on his seat in the classroom, uses a slanted desk...he's becoming aware. And with that I want to give him the skills to wade through the questions that his peers have so they can all understand each other and embrace their differences.

Email ThisBlogThis!Share to TwitterShare to FacebookShare to Pinterest
Labels: Autism

I'm really proud of him that he was able to articulate that so well.

That field trip was meant to be. It was the right time for the kids to be able to talk to each other with the help of a "Mommy". Logan and You did a Great Job.

This brings tears to my eyes! What a wonderful experience for you and Logan to share. (He has an AWESOME mom!)

Oh, I remember that field trip well- I was 9 months pregnant at the time when I chaperoned!! :)

This was lovely to read, and I'm so impressed by both you and Logan, with your comfort and shining example, you're a wonderful model for him.

Thank you all for your kind words. It's a learning process this parenting gig...I know we all have our shining moments! Let's celebrate that!

Great site. A lot of useful information here. I’m sending it to some friends!