When I was married to a man no one ever asked me that! 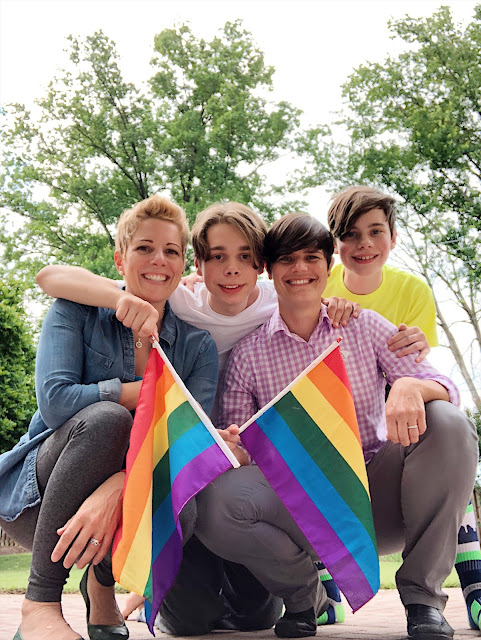 And now I am married to a woman.
Stay tuned for my book (coming out 2019) where I talk all about this transition but for now here are my observations about the differences going from a heterosexual relationship to a gay relationship.

When I was married to a man:
-no one ever came to our house and immediately assumed we were siblings before thinking we were married.
-when hearing that we were married the next question asked was never, “legally married?”
-when someone else was introducing us, that person never referred to my spouse as my “partner”.
-no one ever asked us if our children were biologically ours.
-strangers and associates never asked how we got pregnant.
-no one ever asked if our parents and family were ok with our relationship.
-when we got married, people didn’t stop talking to me because they “disagreed with my lifestyle."

The questions and comments that have been asked or said to me after learning that I am married to a woman reminds me of the days in Sunday school in the Presbyterian church in which I grew up, every year we would start with learning the Golden Rule, “do unto others as you would have them do unto you” (Matt. 7:12). And so I wonder if we all took that approach would the world in which we live be a more compassionate place to exist? Ask yourself would you like it if someone inquired about the intimate nature of how your child was conceived? Would you be okay with someone questioning the legality of your marriage?

I know it's natural to be inquisitive about things that may seem different than you, but if you don't know people very well, maybe ask yourself how your question might be received before you speak and if you would want the person you are speaking with to ask about your infertility or if you used donor sperm. Also, try paying attention to body and spoken language. Gay couples often overcompensate with language and are forthright from the beginning about their relationship status verbally, take your cue from that and use their language. I always immediately say "this is my wife, Lauren" when introducing her, for example. Oftentimes gay couples also make it very clear in subtle ways that we are in fact a couple, and it’s typically the same ways heterosexual couples do. Leaning in towards the person, using “we” language, etc.

I do believe that when we know better, we do better. It starts with very small changes that are easy to make. My marriages have been very different because of the people involved but both have had many similarities as well. Because in the end....it’s a marriage between two people and the gender of those people doesn’t really matter. Love is love and all marriages are equal.