Autism and Scripted Speech- How we Conqured! 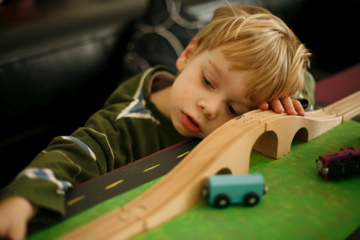 I often get asked how did I know L was on the Autism Spectrum and the answer is, I didn't. I knew something was "different" with him though. We were in a playgroup in Seattle from the time that L was 6 months old, up until we left Seattle to come back to the east coast. For 4 years we met these other mamas, who became my best friends, and their kids each week and all of the kids were the same age. It was an incredible experience as a first time mom. You were a part of every child's first moments; first steps, first tooth, first words. And right around two years old all the other kids in the playgroup began to talk and string words together in small sentences. As they played they began to use those sentences with each other. L had words but not really sentences. He wasn't stringing words together the same way that the other kids were.

I expressed concern to my pediatrician and family members and everyone kept consoling me that some kids are "just late talkers." But in my gut I knew it had to be something else. Right around that time our second son, Z, was born and our "no TV rule" that we so proudly stuck to was thrown away as I was exhausted and needed 30 minutes to stick L in front of something so I could breastfeed. He became obsessed with the Thomas the Tank Engine show and Bob the Builder. Within 5 minutes of turning off the TV he would grab his trains or his Fisher Price Little People and reenact the entire episode word for word! The kid who wasn't speaking in sentences, but yet could memorize a 30 minute television show. It wasn't making sense.

I would lay down on the floor next to him getting my face close to his as he would roll one train back and forth, in one place, reciting the lines from the Thomas the Tank Engine show that he just watched with the correct emotional emphasis. I would lay there and look into his eyes, which were somewhere else, listening to him talk. I could say his name repeatedly within five inches of his face and he wouldn't react, the only way to get him back into the present moment was to deliver the wrong line. Since I watched the show with him, I knew the plot so I would interject and it would immediately snap him out of it. He would look into my eyes as though he hadn't seen me there before and then he'd furrow his little brow and say, "No mommy!"

These memorized lines from television shows became his language and he would use them in real life to communicate. When he wanted something to drink he used a line from Bob the Builder, "Want a spot of Tea? Why yes, I'd love one." As an exhausted mother of two I rolled with it and began to understand my son in a way that I didn't before, we had a language now to use together. Friends and family members thought it adorable and hilarious when this little 3 year old could instantly talk in a British accent and deliver a funny line in order to get more water in his sippy cup. That line, "Want a spot of tea?" would later be the line that would have me sobbing on the floor and doubting myself.

Once we moved to the east coast we began seeing an incredible speech therapist who informed me that I needed to stop obliging L with his memorized script, she called it echolalia and it's also referred to as scripting which can be a form of stemming for kids on the Autism Spectrum. My homework assignment was every time that L said "Want a spot of tea?" in order to ask for more water in his sippy cup to look him in the eye and tell him to say "L, say I want water please."
L would look at me confused, lifting his sippy cup higher in the air. "Want a spot of tea?!?!"
"Say, I want water, please."
"Spot of tea!!!", L would begin to get tears in his eyes and a confused look on his face.
"I want water, please.", I would repeat.
"Spot of tea!", yelling and with tears now streaming down his face.
He would stomp his feet and eventually throw himself on the floor, a sobbing mess mumbling "spot of tea...spot of tea..." At this point the baby would be crying as well. This would happen several times a day. The same exchange of lines. The same amount of tears.

The speech therapist told me to be consistent, she reaffirmed our goals each week and insisted that though it's hard it will be worth it. "Hard" is not the word I would use to describe it accurately, torturous would be a better word. To stand there and repeat the line you want your child to say while he cries and looks so confused, not understanding why I am not going along with the ususal script. It was emotional torture. But in my intellectual mind, I knew it was for the best in order for him to develop appropriate language communication. I wasn't perfect in the process, I caved several times. I'd give in because I didn't have the fight in me that day. But I always regretted it later knowing that I wasn't helping him by continuing to allow him to use scripted language. And then there would be the moments when neither one of us would back down and the result would be L and I intertwined in a hug sobbing on the kitchen floor holding on to each other as though our lives depended on it. As we each mumbled "water", "spot of tea.", "water", "spot of tea."

That's what Autism looked like in our house in the very beginning. It was beyond hard, both for him and me. But we did the hard work of early intervention therapies and looking back now, he's about to turn 14 and recently accepted into the National Junior Honor Society, all of those moments of sobbing on the kitchen floor were totally worth it!

You do such a beautiful job of sharing. So proud of you and L. What an incredible journey. From a very great distance, I'm so thrilled to see all that has accomplished. I can't wait to see more. Love you guys.

I left the pediatrician who told me that my older son was on the spectrum because the words he had were words for colors...and that I was enabling him to not communicate with me because I did not insist he speak the absolute right words when he wanted or needed something.

Turns out that my older son is the "normal" one.

I hate that we are made to feel inferior because we do not have the same education as our medical professionals. Well guess what....I have a damn DOCTORATE in my children.

Since the day I met you, and L., you have empowered me to speak. And as I walk on this path with my YOUNGER son, who I had to fight and kick and scream to obtain a diagnosis, I continue to follow your example. <3

Amazing! This story just gave me sooo much hope. I hate trying to get my 3 year old HFA son to say I want phrases. He crys and doesn't yet get it, but is delayed at expressing his needs. Memorize fill songs and tv shows. Ugh....I can so relate. Thank you so much for sharing!

Thank you all for your comments. The road, at times, feels very lonely. Thank you for reading and being a part of this journey with us.