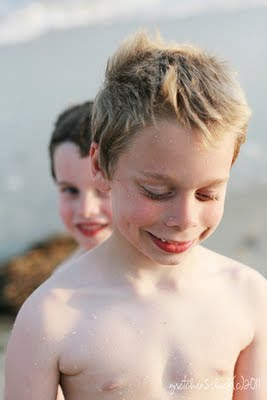 It's a beautiful Sunday; the sun is shining with not a cloud in the sky. I've planned today to be mellow and laid-back, because Monday begins a new routine of going to camp instead of school.
Typically a change in routine – even if it's a fun change in routine – causes my oldest son, who is on the Autism Spectrum, to behave in a heightened anxious or else emotionally sensitive state.
I dare say it's been a perfect day. Everyone has gotten along; there haven’t been any arguments.
The kids are fastened in their booster seats engaging in idle chitchat about the cars and people around them as we sit in traffic on the beltway. For no particular reason, I don't have the radio on. Instead of focusing my attention on an NPR newscast I am eves-dropping on the conversation going on in the backseat between the boys.
L asks, "Do you like coconut?"
Z promptly replies, "No, I hate coconuts."
"Do you like asparagus?"
Z crosses his arms and makes a disgusted face, "No I hate asparagus! And you know what I really, really hate?"
L looks at him eagerly, "What?"
Leaning over into L's seat in a sharp whisper, "You. I hate you."
I slammed on my breaks, which caused the car behind me to almost rear-end us, and I whipped my head around glaring at my youngest son while shouting his birth first and middle name and then continued with, "We do NOT speak to people in our family that way."
He's quick to start apologizing, "I'm sorry, I'm sorry L. I didn't mean it."
Slowly I execute my minivan over to the shoulder, reading curse words from the lips of the drivers behind me through my rearview mirror.  Once in park with the hazard lights on, I turn around to see L staring forward, eyes wide. Z already had huge alligator tears streaming down his cheeks.
I continued to look at him with a mixture of rage and disbelief, though he could not meet my gaze. Z spoke with such hatred in his voice, and it was unrecognizable coming from him. Looking back I am so thankful that I was behind the wheel, because at that moment this anti-spanking mama might have been swayed.
"Why did you say that?"
Biting down on his lip he musters out, "I don't know."
There is a pause. "L never plays with me. And I don't have any friends at camp tomorrow!"
The floodgates of tears have been opened.
Ah-ha. Now I understand it all.
Yes, it's easier to create anger toward someone than to admit your own vulnerability. This tactic isn't only used by five-year olds; I've known a few adults to do the same thing. Think about how often you are quick to judge, act negatively or accuse when you should be pointing the finger at yourself and recognizing  that you are scared to show your own vulnerability.
We talked about how great camp is going to be, relieving his fears while boosting his ego, telling him how likable he is and what a good friend he can be. Our minivan has returned to its calm state, I make my way back into traffic and the boys proceed to tell bad knock-knock jokes.
In a moment of stillness, L says to no one in particular, "I'm scared about camp, too, but that doesn't mean you can be mean to people."
So, so true my son.

Movements, turned to the one he had called bill, a boy of about his own.