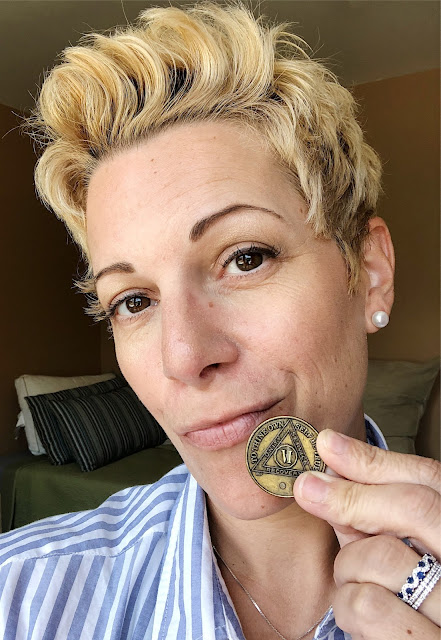 Today I am celebrating 6 years sober!

Each year that passes seems surreal, as though it's someone else's life. Six years ago I posted a "last call for alcohol” on Facebook with a picture of all the bottles from our stash lined up on the kitchen counter. I went to bed and had left them there overnight. Fifteen hours went by with only a few friends responding with their desires and requests. I could not tolerate the bottles on the kitchen counter. Hidden in the cabinet out of eyesight was fine, but lined up on the counter and the first thing that I saw as I came into the kitchen, made myself breakfast and prepared my coffee. It was too much. It felt too tempting at 8am, I was newly sober. I felt raw, like an open wound that the doctor tells you will heal quicker if you keep it airing out and exposed but all you really want to do is cover it up with bandages and far away from anything that might hurt it. I began pouring the alcohol one bottle at a time down the kitchen sink.


The first bottle I reached for was a small bottle of Jack Daniels. I couldn’t remember where this came from or how it came into our possession, it's not something that my wife or I would normally drink. Who did we buy this for? Did someone leave this at our house from a dinner party? The strong whiskey scent took me back in time to memories of underage drinking with Billy* in his giant yellow Buick. Billy was eighteen years old and had a drinking problem but he was a good time to be around when he was trashed because he’d let me drive his car. I was fourteen years old, far from getting a license of my own and yet I was his designated driver. At this age, I hung out with older kids and perfected the art of acting more mature for my age so that they would let me still hang out with them. For me, driving was more thrilling than drinking alcohol.

The next bottle was a plastic liter of well tequila. Images of Mad Mex flooded my mind; a restaurant in Pittsburgh, Pennsylanvia. My college friends and I would frequent this local joint because at 10pm the food and alcohol were half off. Not only did their food taste incredible to a bunch of college-aged kids who were living off of ramen noodles but the margaritas, especially the largest size named “Big Azz”, was really why we were there. Every 100-pound girl could get pretty tipsy off of a half-priced Big Azz, and in college, this seemed like a pretty important task.

Then I went right for the jugular vein, Seagrams Seven Crown. I twisted off the cap and this was my moment of wavering. I didn’t actually want to drink it because I convinced myself that anyone who drinks first thing in the morning; unless it’s a holiday, brunch or celebration involving mimosas, a person who drinks before the evening clearly has a drinking problem…an alcoholic. And I was not ever going to be “one of those people”. It didn’t matter that some nights I would consume two bottles of wine, the equivalent amount consumed as the person who started drinking at 9am, only I did it in a record-breaking three hours. None of that ever mattered to me, what mattered was that I drank when I deemed drinking was appropriate, which was in the evening. Keep in mind that at this point, with 24 hours of being sober under my belt, I was not yet admitting to myself or anyone else that I was an actual alcoholic. I only thought of my drinking as "being out of control". Of course, I realize now how ridiculous this train of thought was and with six years of sobriety, I confidently say that I am an alcoholic, in recovery.

A 7 and 7, had always been my go-to cocktail. And my moment of wavering was actually mourning that I’d never taste it in my mouth again. It goes down smooth; you can drink it fast or slow. The bubbles are nice and yet you don’t have that filmy feeling on your teeth from drinking rum and cokes all night. So many memories are associated with this one cocktail. I can recall the conversation with the bartender at the beachfront bar in the Bahamas in 1999. Him teasing me about not liking pineapple juice and over dramatically saying how disappointed he was that I wasn’t willing to try his latest drink invention. As he went on and on about the cocktail, my attention was elsewhere. The waves were crashing into the sailboat we had rented and I sat there sipping my 7 and 7, watching the gorgeous man I arrived in the Bahamas with wipe the salt water from his body. I remember thinking; let me drink a few of these so I will have the courage to tell him how in love with him I am.

The alcohol is slowing coming out of the liter bottle and swirling into my kitchen sink, and I tear up at a memory of being with my wife Lauren before we were married when we were simply friends who were both going through a very rough patch in our lives. We were at a dance club and I stood by the bar watching her on the dance floor with another woman and I felt so sad for myself. At the time I wasn't interested in being with her romantically, I was in the process of finding the courage to tell my husband that I wanted a divorce. I was in awe of her courage of being a lesbian, for being "out of the closet" and proud of who she is. I stood surrounded by people and yet I felt so alone, this was a constant feeling in all aspects of my life. I stared at all the women on the dance floor, dancing happily with each other in celebration as I idling spun my wedding band around my finger. I ordered another 7 and 7 so that I could numb the pain and loneliness that I was feeling and so I could continue to pretend that I was the happy-go-lucky girl, a facade that I used a lot and had become dependent on in my first marriage.

People use alcohol for many things; typically it is to let go of their inhibitions. To dance on the bar, show their boobs at Mardi Gras or sing a song at the karaoke bar. Some people feel as though they are more fun after a couple of drinks or are able to talk to anyone, letting go of their inhibitions of public speaking or being at a party where they don't know anyone. I like to call it: liquid courage. I’ve never needed alcohol for that. I’ve always been daring, I’m a push-the-envelope type of person. I’ll hog the microphone at any karaoke bar if you let me without a drop of alcohol in my bloodstream. Alcohol served a different purpose for me, it allowed me to remain numb. To numb everything I was feeling so that I didn't have to face my own demons. I wouldn't have to feel my own unhappiness.

For years I used drugs and alcohol as an escape from my life, to pretend that I was happy. I used alcohol to cover up my vulnerability. Like a costume, I would put on the facade of happiness and that I had my life all put together. But inside I was falling apart and feeling very confused. I never hit a rock bottom that resembled something you'd see on a television movie. I didn't lose everything and end up on the streets homeless like some people do. But at the same time, I lost myself. Alcohol allowed me to numb my feelings and stop living for me.

Yoga and meditation forced me to look within and was a powerful tool in my recovery. In the eight limbs of yoga, (the fifth one) Pratyahara is about withdrawing from the outside stimuli and directing our attention inward. Taking the time to observe our cravings and habits that are not good for us. When you are in this place of healing and vulnerability, when you get rid of the distractions of life and tune into your true spirit, lots of emotions will surface. Present struggles along with the past baggage that you've been carrying around with you from place to place. Becoming sober has taught me how to accept who I am. Every morning I wake up and say to myself, "Today I am going to be the best version of myself. I'm not going to pretend that I am someone that I am not."

Email ThisBlogThis!Share to TwitterShare to FacebookShare to Pinterest
Labels: Sobriety