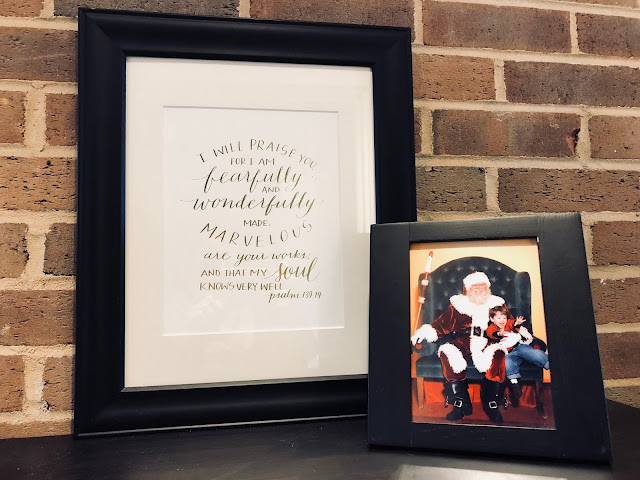 The photos that are posted on Facebook aren't capturing the whole truth of how or why the picture was taken. We have all done a really great job at learning how to wear masks on social media. Posting photos on Facebook that are somewhat planned. Oftentimes you can't see the tears and the pain behind the smiling faces and coordinated outfits. It's a snippet or slice of the story. And I am guilty of this as well! But I know that behind every picture we post on Facebook there is a story, the moment right before and the moment after the picture was taken which if we could truly see them would encapsulate the whole story. 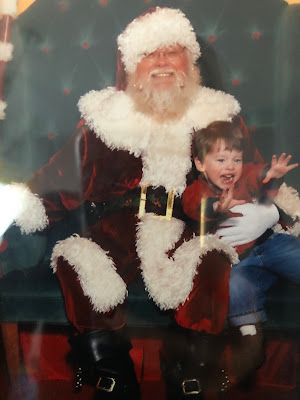 That's the case of the photo above, this is my son Z when he was about three years old. And we can all look at that photo and immediately identify with what is going on, small child in tears on Santa's lap. I'll bet there is a website somewhere with a collection of photos like this one. But when I look at this picture I don't see the small child scared of Santa I see the intention that I had to create this image and moment for Z.

My oldest son, L, is on the Autism Spectrum and at the time this picture was taken we were deep into many various therapies and early interventions. L was attending kindergarten full time in a mainstream classroom. Twice a week speech therapy appointments, behavior therapy, physical therapy and then on Saturdays he attended a developmental clinic for a few hours where he worked one-on-one with a college student who was specializing in Special Education to work on therapies that coincided with his appointments that week. During all of those appointments that I took L to, Z was with me. A little three-year-old sitting in waiting rooms with his little bag of toys and books. Always being told to whisper and not to run around and "just five more minutes sweetie".

The guilt of it all at times overwhelmed me. My heart hurt for L to have to do the hard work of learning how to function in our world and at the same time, my heart was continually breaking for Z for having to live under the umbrella of Autism and the limitations that it created in our lives. At some point, I looked through the scrapbooks that I made for the boys that documented every moment of their childhood and I realized that I didn't have a picture of Z with Santa Clause! It wasn't the joke of the second child who doesn't get as many pictures as the first child. I was always snapping pictures and scrapbooking moments of the boys.

Truth be told it was because L wasn't able to go to large places where there would be a lot of people, places like malls. Standing in line to see Santa was impossible for L, he would have a total breakdown and I knew this about him so I would avoid going to places where there would be large amounts of people and noise. Which meant that these major milestones in most children's lives, like sitting on Santa's lap, Z has missed them because of his brother. I was determined to change all of that! I researched the mall that had the best looking Santa in our area and I made a date with my little three-year-old guy to see him. We went out to eat beforehand in a crowded, busy, noisy restaurant and then to the mall. As we stood in the long line, Z was so excited, he was dancing and singing a made up song about "me and mommy see Santa....me and mommy....". I can still hear his sweet little sing-song voice in my head.

The line continued to move at a slugs pace but that didn't hinder Z's enthusiasm, he's talked to the kids in front of him and behind him. As he looked ahead to see how much closer we were to Santa each time we took a few more steps forward, he would smile up at me. My heart was bursting! I was so happy that we were doing this together, just me and him. That I was able to give him, even if it's just for an afternoon, what feels like a "normal childhood moment" that wasn't shaded by having a brother on the Autism Spectrum.

Eventually, we are at the head of the line and watching the family in front of us take their picture, these kids are seasoned experts who know exactly what to do and the entire family has matching sweaters on. Z is literally bouncing in place, he is so excited! Now it's our turn and he shyly shakes the hand that Santa holds out to greet him with and whispers his name after Santa asks him. And like all Santa's he asks the essential question, "What would you like Santa to bring you for Christmas?" I am surprised that rather than telling Santa everything he wants, instead, he tells Santa the items that L would like. I didn't realize in the actual moment how telling that was of who Z is as a person, in his core. Z suddenly looks over his shoulder and then around us, as if he just realized "where's L?, Mommy...where's L?"
"Z, sweetie it's your special picture with Santa.", I tell him as I pick him up and place him on Santa's lap. I stepped to the side as instructed by the Santa's helper and CLICK.
That's the moment.
The scream and immediate tears, the arms outstretched as he cries out his brother's name realizing that he isn't with us nor is he going to do this with him.

I wish I could say that I learned my lesson from this experience, that I could accept that Z was totally fine with the existence that he had even if it was under the Autism umbrella. No, I didn't learn that lesson with Santa, it took a few more times for me to realize that I was projecting my own interpretation of what life should look like based on my own experiences of childhood. And rather than trying to conform my children to what my normal was...I had to embrace and accept that how we were living was pretty fine for everyone involved. That Z was not slighted in any way by missing out on Santa pictures or trips to Disney world. The Autism umbrella was his safe place, this is what his soul knows and for him it's magnificent. This is our "normal".