A lesson in TRUST and LETTING GO 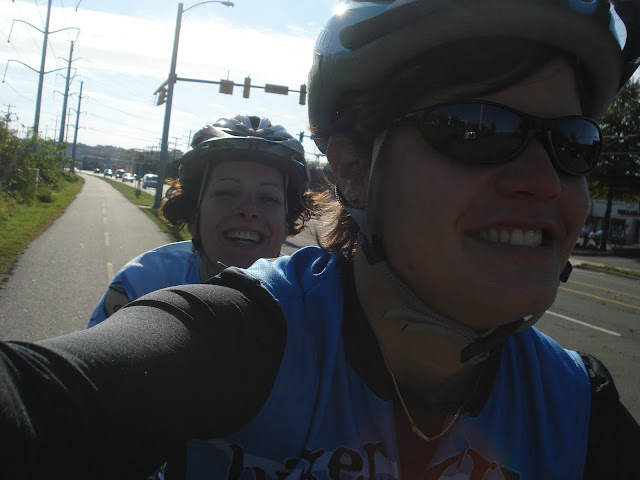 Lauren and I decided to randomly end our bike season of 2009 with a bike ride on my parent's tandem. (We are not winter bikers) We had no idea what we were getting into. On the drive to the Washington & Old Dominion Trail we were placing bets on how many times we would fall. (none!) I didn't expect to learn any real lessons. But I did. We joked that it was like therapy.
The person in front, the Captain, has total control. The Captain steers, changes gears, warns the other rider (the stoker) of upcoming hills, bumps etc.
The stoker? The stoker...pedals. And guess who started the ride as the stoker. Yes, me.
Right from the beginning my heart began to beat a little faster. Putting all my trust in Lauren to make the right decision for the both of us. And the thing is Lauren is a really great bike rider, she knows what she is doing. I didn't realize how hard giving up total control was for me. I laughed nervously when Lauren would ask if I was OK, trying to play it cool. But I was struggling. Really struggling.
We rode 10 miles maybe and decided to switch positions. As the Captain, I bopped my head. My heart was beating at it's normal rate. I laughed real laughs and was able to chit chat. I was OK with having this responsibility. I know this role. I'm good at it. But that doesn't mean that I shouldn't challenge myself to grow. To release. To allow someone else who I know and love and most of all trust, to take the lead.
To be the Captain.
We decided to start our bike season of 2010 with another ride on the tandem.
I'm ready to pedal.

Awesome life lesson and self reflection! I love it!!

Thanks for sharing-
XOXO

It really does take a lot of trust because if you never rode on a tandem, the stoker doesn't see anything in front only the back of the captain. You depend on the Captain to know what to do at the right time. It will take practice, but YOU can be a good stoker as well as a good Captain.

Tandems are such neat vehicles. My parents have had one for years. Glad to read about your experience.